It has become Lego World at our house since Noah's birthday! 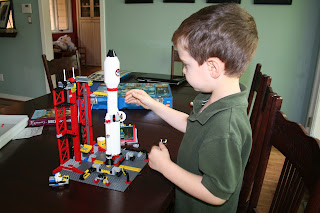 Noah has been having a great time with his rocket and mission control set.  This picture was taken on the day we finished building it.  Since then, it has been taken apart and he has been rebuilding it so that it can carry cargo to the International Space Station.  He's also been testing different rocket designs and having fun watching them "explode legos" if the design doesn't work. 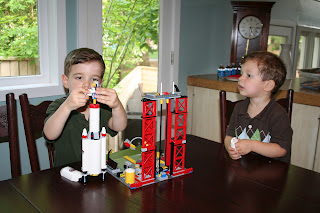 All these Legos have been hard on Isaac, though.  Look at his face in this picture!  Noah told Isaac, "You can watch me play but you can't touch anything."  Isaac is watching so intently and so badly wanting to touch the legos.

I usually emphasize that the boys need to share their toys, but these legos were birthday presents and are clearly for older kids.  So, now Noah plays with his birthday legos during Isaac's nap time and then they get put away in a secret place.

The regular legos come out when the both boys are awake, and Isaac has been enjoying having little lego cars and trucks of his own that he can play with and destroy at will.

The birthday legos have given me a glimpse into how hard it can sometimes be to be the little brother.

Posted by Educating My Own at 7:42 AM