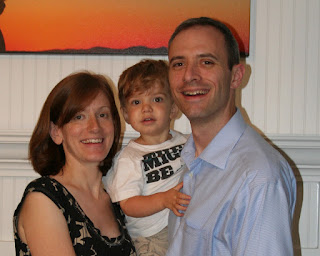 Posted by Educating My Own at 8:59 PM 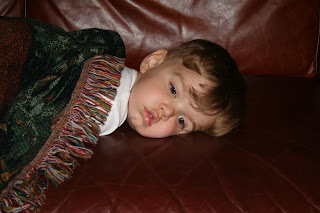 Poor little guy! Noah has strep throat and he's been pretty miserable for the last few days. He was prescribed Keflex, and it helped him feel better, but after a day he broke out in a rash from head to toe. So, we went back to the doctor and found out that his rash is an allergic reaction to the medicine. He's on Zithromax now, so he should continue to get better as his rash clears up. He's finally eating some solid food again after four days of mostly drinking juice and yogurt. We will all be so happy when he's feeling totally better and we can get back to having fun again!
Posted by Educating My Own at 6:42 PM

Posted by Educating My Own at 8:16 PM 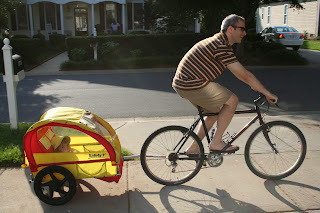 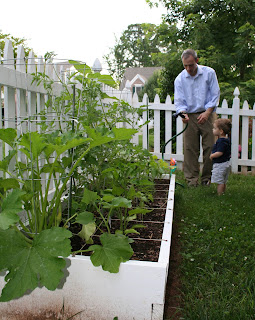 Noah's garden is growing like crazy! Matt put in cages for the tomato plants and squash. Noah still help to water. But somedays it seems more of a chore, than the excitement of the past few weeks. The excitement should return when he can pick his first tomatoes. Here are a few more garden pics.
Posted by Educating My Own at 7:49 PM 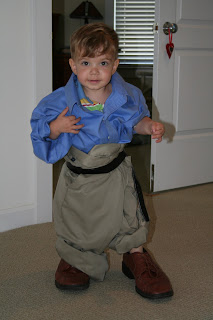 Noah loves doing everything that Daddy does. When Matt shaves in the morning, Noah pretends to shave too. Noah loves looking at Matt's clothes in the closet, and his favorite thing is when Matt lets him wear a belt. Well, Noah took it a few steps further on Saturday. He wanted to wear ALL of the clothes Matt wears when he goes to work! Then, when he was dressed, he kept saying, "Bye bye Noah!" We played along and said good-bye to him, but that wasn't enough. He wanted us all to go downstairs, and he wanted us to kiss him good-bye at the garage door. Then he insisted that he wanted to go in Daddy's car and "drive." We played along, and once he had some driving time in Daddy's car, he was fully satisfied! Here's a few more pictures.
Posted by Educating My Own at 7:33 PM

Posted by Educating My Own at 8:04 PM

We are so excited that Noah is going to have a baby brother in October! We're having fun thinking of them running around and playing together in the future. We are so thankful that baby boy is healthy and growing. It was fun to see him on the ultrasound. This next picture is amazing - it's exactly like Noah's foot, when we saw it on the ultrasound, and it's also exactly like Matt's foot :-)

Posted by Educating My Own at 2:08 PM