We decided to celebrate our new flat, grassy backyard by going camping...in the backyard! 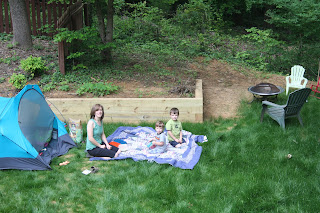 The boys were so excited about the idea, and Noah worked very hard to assemble all the "treasures" he would need to survive in the wilderness 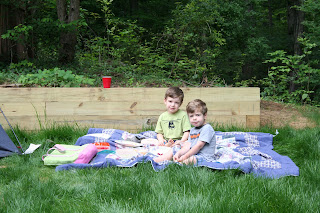 When I heard of the camping plan, I was all on-board.  I thought it would be fun to eat a picnic dinner in the backyard, roast some marshmallows, snuggle in the tent, and then all come inside when it got dark.  Don't get me wrong, I love camping.  It's just that we have a 2-person tent and a 4-person family. 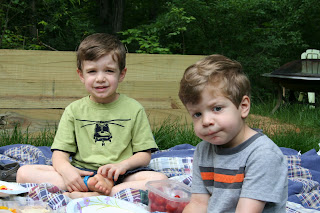 Noah insisted that he was going to sleep the whole night outside.  And he insisted that part of the plan is that we're supposed to sleep together as a family.  I played along and had fun, but I was still sure that we would be inside before 10pm. 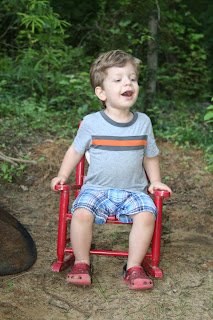 We roasted marshmallows and made s'mores.  (Aunt Cindi, this picture is for you - Isaac is watching the fire and saying "Fire! Fire! Fire!) 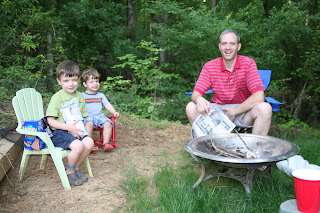 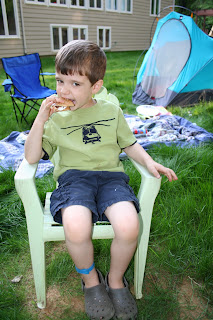 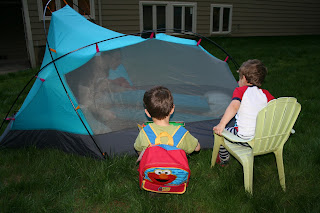 The boys watch Daddy get all the sleeping bags ready. 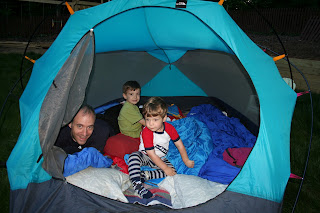 He managed to figure out how to fit 4 sleeping bags and pillows into a 2-person tent.

And did we actually all spend the night in the tent?  Yes we did!  Matt and Noah fell instantly asleep, and Isaac and I fell asleep at least an hour later.  Sleeping with the boys was like sleeping with a litter of puppies.  They spent the night rolling all over the tent!  Matt and I were both sore and tired in the morning, but it wasn't anything some advil and extra coffee couldn't cure.

We have plans to camp in our backyard again this summer, but we'll buy a larger tent first!