Matt filled up the sandbox and within minutes, Isaac was in it and had buried his legs entirely under the sand.

Noah tends to take a more conservative approach.  He walked around the sandbox, inspected it, put his hands in it, watched Isaac bury himself, then eventually put his feet in and got sandy.  A short while later, he was sitting in the sand and having a great time with the sand toys.  The next day, Noah was lying in the sand and pretending he was in a swimming pool.
Two very different approaches for two very different personalities!
Posted by Educating My Own at 9:07 AM

Noah loves to give Isaac a big hug in the morning.  Noah runs into Isaac's room and shouts, "Good morning baby Isaac!"
It only lasts a second, but one morning I planned ahead and left my camera outside Isaac's room so I could get a picture of them.
Posted by Educating My Own at 9:01 AM

The boys took a break from playing to eat a snack of peanut butter crackers and apple slices.  Mmm!
Posted by Educating My Own at 9:08 AM

After dinner, our Easter guests were treated to a concert from Noah.  We were chatting outside when he decided to set up his microphone and bring out his guitar.  He sang a medley of his favorite songs and thoroughly entertained our guests with his showmanship.  He sees a gathering of people as an opportunity to put on a show!  God has big plans for this kid.
Posted by Educating My Own at 8:35 AM 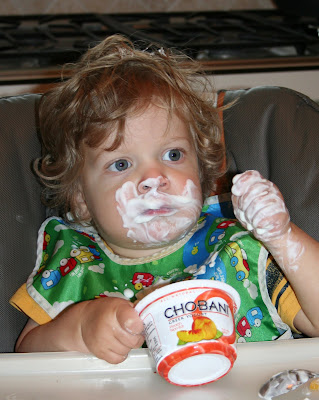 Are you suffering with dry skin?

Are your cheeks and hands still chapped from the winter wind?

Take a Chobani Greek yogurt (any flavor will do, but Isaac prefers peach) and rub it all over your cheeks.

Make sure you rub it ALL over.

Your hands need it too, and if you're bold enough to rub it into your hair, you will develop a silky sheen.

Along the way, if you find bits of fruit, feel free to eat them.  They taste good.

When you're asked about your perfectly moisturized skin, you can decide if you want to share the secret.

You'll be surprised how many kisses you get on your cheeks now!

Posted by Educating My Own at 9:44 AM 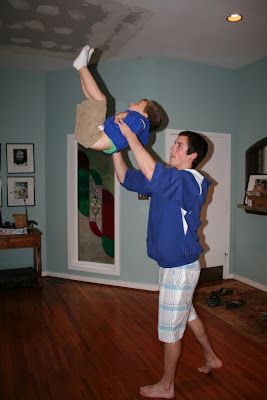 Captain Noah is ready for takeoff. 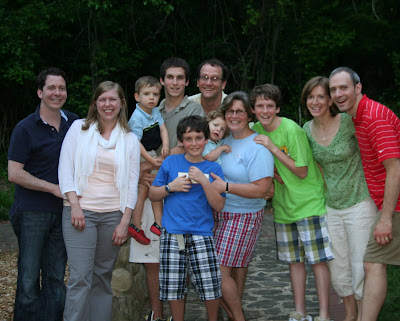 We had a great Easter celebration!  We dyed eggs, had an Easter egg hunt in the yard, and had a great dinner with good friends.  Here's the rest of the pictures!

Posted by Educating My Own at 9:36 PM 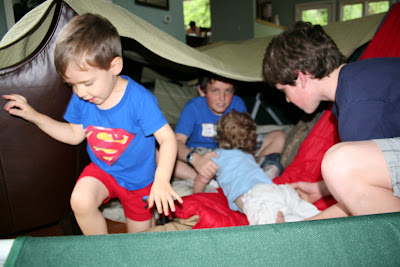 What do you get when you have five boys staying together for a few days?  Non-stop fun!  Noah and Isaac had so much fun when Ryan, Jonah and Trevor came to visit for Easter.  Long stretches of time would go by and I would think, "Where's Isaac?  I haven't seen him in a while..."  I'd look around, and he would be in the fort that the boys made in the great room, or playing happily in the play room with one of the boys.

I couldn't find a picture of all the boys together, but this one captures the spirit of the weekend better (except Ryan is missing in the picture).  In this picture, the boys made a fort out of their cots and some blankets in the great room, and Noah is still wearing his Superman pajamas.  Life doesn't get much better than that!

Here's some more pictures of the boys' adventures together.

Posted by Educating My Own at 9:53 PM

One of the things we had been especially looking forward to about out trip to Arizona was getting Isaac's profile picture with the view out of my parent's window in the background.

So, it was very important to us to get a similar picture of Isaac.  Uncle Don (a professional photographer) suggested that we face Isaac the other direction in the window so the photos will compliment each other.  That was a great idea - I would have never thought of doing that!

Once were in Arizona, we realized that a sunset shot wasn't going to be possible.  Since we were visiting in the spring, the sun was setting later.  If we wanted a sunset shot, we would have had to wake up Isaac and put him in the window at about 10pm EST.  That wouldn't make for a good picture!

So, we took some shots to see how they turned out with a daytime mountain view.  We're so happy with the results!  I love the way Isaac's mouth is a little open, and you can see a few curls in his profile too!  The mountains are clear in the background and it's a beautiful blue sky.

It is a perfect picture.  Uniquely Isaac. 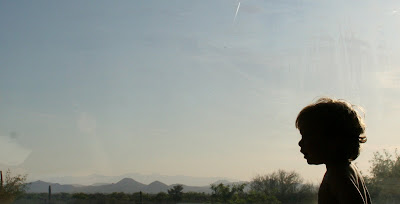 Aren't they interesting together?
The same view.
Completely unique. 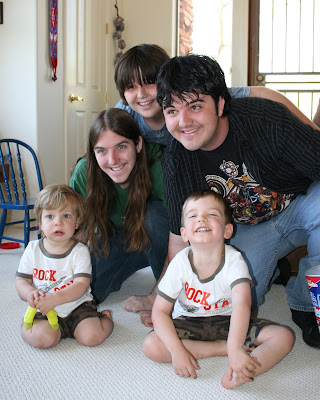 Noah and Isaac had so much fun with their "big boy" cousins, Travis, Connor and Jacob while we were in Arizona.  They had fun getting to know each other, and the "big boys" did everything they could to make Noah and Isaac laugh for the entire afternoon!  Here's some pictures.

Posted by Educating My Own at 7:27 AM 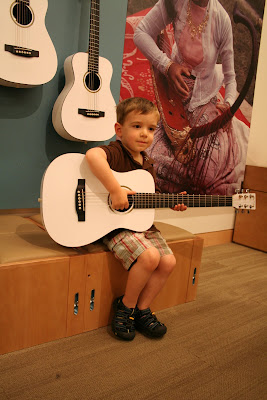 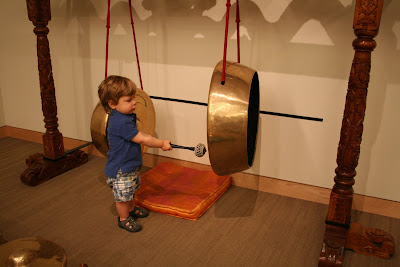 When we were in Phoenix, we had a great time at the Musical Instrument Museum.  We all had headphones and we walked around the museum to see instruments from all over the world while we watched videos and listened to the instruments being played.  The boys liked wearing the headphones and hearing so many different kinds of music.  But, by far the best part of the museum was the "hands on" room where you could play all sorts of instruments from all over the world.  We could have stayed in that room for the whole day!  We will definitely be going back!

Posted by Educating My Own at 9:44 PM 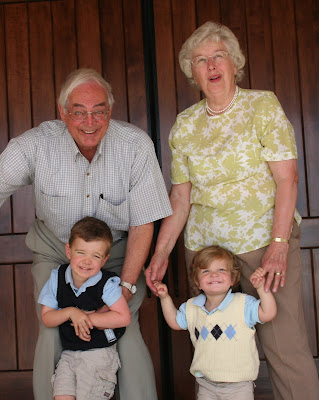 We had a great trip to Arizona to visit Grammy and Yaya in April.  It was a big trip to fly 4.5 hours, then adjust to the 3-hour time change.  But, it was completely worth it!

The boys had a great time exploring Grammy and Yaya's house, and they especially liked playing at the little desk/office that Grammy had set up in their living room. Grammy had set it up with Noah in mind, but Isaac had just as much fun playing there (when Noah wasn't around or didn't notice).  They also had fun playing outside with all the little rocks that are used for landscaping in Arizona, and spending the afternoon playing at the community pool.  Here's some picture of our fun trip.

Posted by Educating My Own at 7:26 AM 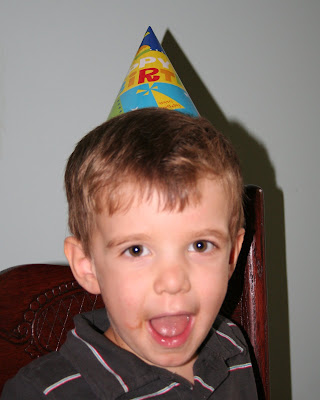 We had a great day of celebration! Noah woke up extra early to open up his presents and eat blueberry waffles. His presents were a big hit - a kid's atlas, wooden USA puzzle, butterfly garden, lego kit, and big-boy bike. He had lots of time to try out his bike before we headed to The Children's Schoolhouse for their Mother's Day morning. Noah got a kick out of having Isaac and me at his school. We celebrated this evening with blueberry birthday cake - just what Noah has been asking for!

We love you, Noah!

Posted by Educating My Own at 9:43 PM 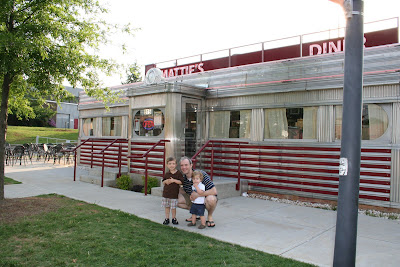 We took Noah on a surprise adventure to Mattie's Diner for dinner tonight. He likes to pretend he runs a restaurant sometimes, like when he helps make sandwiches in the pretend restaurant "Pickles," or when he and Isaac run the play-doh restaurant "Spaghetti and Pancakes." Noah pretends to cook in the kitchen on some days, but other days he takes orders and runs the cash register. So, we thought he would get a kick out of eating at an old-fashioned diner where he can see his food cooked right in front of him. 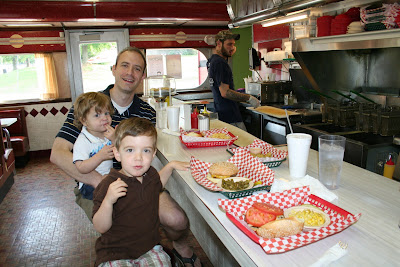 Oh, and eat fried pickes for the first time.

Isaac loved the diner stools that spun around. After he ate dinner, he stood and spun a stool around and around. He could see himself in the shiny side of the seat, and he tried to kiss his reflection as it spun around as he giggled with happiness. 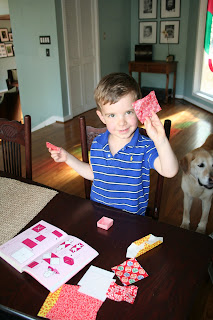 Noah has discovered Origami, except he calls it Origa-MAY because he says then it reminds him of his birthday month.  He can do some basic folds by himself, and he likes to see the finished designs.  The first day, we made boxes together and Noah would quickly unfold each box just as I had finished the steps for folding it.  He really didn't want to keep them folded at all, it was just fun for him to do the process.  The second time we did origami, he did keep the animals (we made birds and dog faces) folded, then he taped them up in his office and created a pretend toy store where kids could come and buy the animals.
Posted by Educating My Own at 1:04 PM 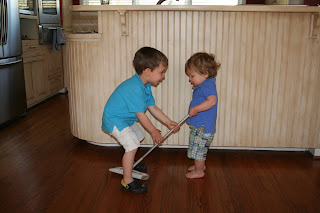 I think it might be time to buy a second Swiffer.  Both boys always want to help, and it's so hard to take turns.  With both boys so eager to help, there's a chance our floors might actually be clean once in a while!
Posted by Educating My Own at 1:00 PM 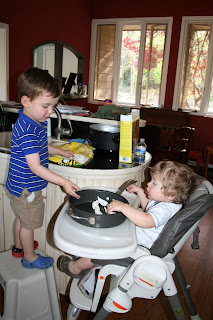 The boys' current favorite dinner is potstickers and spring rolls.  They go crazy for them!  It's such a simple meal to make (just open the packages from Costco and cook), so it's a great meal for the boys to help with.  First, they count the potstickers as they put them in the pan.  Noah then helps to measure the rice and water for the rice cooker. 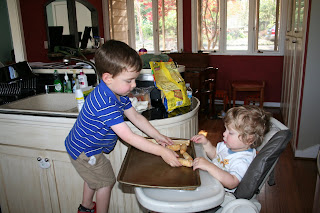 Then they count the spring rolls as they go on the tray.
Viola!  Easy dinner and everyone is happy!
Posted by Educating My Own at 12:56 PM