Noah absolutely loves Elmo, who he calls "El-moooooo." He has a big Elmo, little Elmo, Elmo pajamas, and even Elmo underwear. He must think that Emma looks lonely sometimes, because he often snuggles Elmo up to her as she lays on the floor. He pretends to feed Elmo and give him drinks, and sometimes he makes Elmo dance to music. The Sesame Street people must have done some really intesive market research when they developed Elmo - Noah loves him so much, and he's never seen Elmo on TV! Isn't that interesting?

Posted by Educating My Own at 3:13 PM

There is no better way to wake up from a nap than by snuggling with Daddy.

Posted by Educating My Own at 8:15 AM

Noah has a fun new way to say goodnight to me - as he climbs the stairs with Matt, he gives me a kiss through each of the banister posts. Isn't that so sweet?

Posted by Educating My Own at 7:15 AM

The big hit of Tot School last week was making Play Doh letters. Noah is learning how to roll balls and snakes with the Play Doh, and he likes to call out letters for us to make. He likes to take an M and turn it upside down to make a W, and he's experimenting with other letters to see if they can become different letters. He also found that if he turned an E on it's side, it looks like an M. When he sees an N, he says, "Noah," a D is "Daddy," M is "Mommy" and E is "Emma." We're working on B for "Baubie," G for "Grammy" and Y for "YaYa."
Here our the Tot School pictures from last week. Enjoy!

Posted by Educating My Own at 7:45 AM

We are encouraging Noah's toddler independent streak. He can do so many things for himself now! We bought a couple different step stools to use around the house, and one of his favorite things to do now is wash his hands - all by himself. He absolutely hates it when we look over his shoulder to see what he's doing, or try to speed up the process! We are currently working on the idea that the soapy bubbles need to be rinsed off before you're done washing your hands.
We lowered Noah's highchair so he can get in and out by himself. It's so much easier like this, but the major disadvantage is that his tray is right on Emma's level - it's like a private dining tray just for the dog. We need to put Emma in a different room when he eats now.
Other newly independent activities are getting in and out of the car by himself (he still needs a little boost to get into his car seat), and getting in and out of his crib with the use of a step stool.
Here's some pictures of Mr. Independent.

Posted by Educating My Own at 7:32 AM

Mmm...ice cream! The only thing better than ice cream is FREE ice cream! We were happy to participate in our local ice cream shop's customer appreciation day by wearing our pajamas to get free waffle cones! Here's the yummy pictures.

Posted by Educating My Own at 8:32 AM

Matt and Noah are having a great time preparing for their square foot garden. They have done everything together: picking out the wood for the planter, building the planter, choosing seeds, and planting seeds. Noah loves everything about this project! They planted a few seeds early, and Noah loves looking at the little sprouts. He can even identify a few of the vegetables just from the seed packets. Here's the pictures of the project so far.

Matt ran in a half-marathon relay last weekend. We were there to cheer him on near the finish line. Noah is always Matt's biggest fan!

Posted by Educating My Own at 7:03 AM

A Story About Ducks

We walk to the pond by our house to look at the ducks almost everyday. Sometimes we feed them bread crumbs, and sometimes we just go to say "hi." Noah knows that the duck with the green head is the "daddy" and the duck with the brown head is the "mommy." I took pictures of him as I asked him questions about the ducks and he responded with gestures and signs. The story is in the captions of the pictures.

Posted by Educating My Own at 3:42 PM

The Last Traces of Winter

Noah had fun scooping up the "ice," as he calls it, before it melted last week. Here's a few more pictures.

Posted by Educating My Own at 7:37 PM

For Tot School last week, I wanted to do something special with the Things That Go book pages that Noah glued together last week. I hadn't yet assembled it into a book, and every time Noah saw the pages, he wanted to study the vehicles and do more gluing. I didn't think the pages would be as interesting to him once the book was put together, so I decided to make the whole thing into a puzzle. I printed out another set of vehicles, and Noah helped me laminate them (using my new laminator!), then I cut them out and put little velcro pieces on the back of them. I glued the pages of the book to a file folder and put little velcro pieces on those vehicles. Viola - Noah had his own custom-made puzzle. He was so excited by it, but he was initially a little frustrated by the velcro. It was his first time using velcro, and he didn't like that the puzzle pieces didn't lay flat. He did the puzzle once, pulled all the pieces off and put them back in the bag, then took them out and did it a second time.

Not everything we did last week got such a great reaction, as you can see from last week's pictures. I printed out and laminated a new color matching game as a way to work on color identification. Noah was really confused by it because you're supposed to put the cards into piles according to color. Everything else we've ever done with cards involves finding the matching pictures, and there were no matching pictures in this game. I'll try it with him again in a week or two, and he might have a better reaction.
Another thing that I thought it would be fun to do with color was to make cars of different colors (color a car blue, color a car orange... and talk about the colors). I gave Noah all the orange crayons and pencils and asked him to color the car orange, but there was no way he was going to color, because a few of the orange crayons still had the paper labels on them. Peeling off the labels is much more important than coloring!

Noah knows almost all his letters now! He can't verbalize all of them, but he an identify them when asked. He is crazy about letters!

The kid can write letters - who knew? After Noah finished his applesauce, he started making a mess on his tray and talking about letters. That's pretty typical - he loves to play with his food when he's done eating, and he usually talks about letters he sees on boxes on the kitchen counter. But, he kept saying, "O...O...O...T...T...T...I...I...I." I looked at the applesauce on his tray, and he had made an O, a T and an I in his applesauce! He was so excited and proud of himself! It was a big moment!

Posted by Educating My Own at 2:06 PM

Videoconferencing with Grandad and Grammy

We recently started to use Google chat to videoconference with Grammy and Grandad. Noah thinks it's a lot of fun, and it's so cute to see his reaction to the technology. If Grammy holds something up to her camera, Noah puts out his hand to the computer because he wants her to give it to him! He likes to play peek-a-boo when the camera is on - ducking out of the camera's view and then back in again. The highlight of every call is when Grandad makes his clock strike and Noah "counts" along with the chimes. Noah and Grandad have a special bond with clocks!

Waiting for Another Firetruck

Noah loves it when a firetruck goes past our house with its sirens wailing. When the last firetruck went past, Noah kept signing "more! more!" and he ran to the window to wait for another truck to go past. He waited and waited and no trucks came, so he brought his little chair to the window so he could be more comfortable. More minutes went by, and he went to get his toy firetruck. He put it on the windowsill and made the lights flash and the sirens wail. It was a good substitute, but not as good as the real thing!

Posted by Educating My Own at 7:32 PM

Noah absolutely loves eating veggies and Ranch dip! When Matt comes home from work, he sits Noah on the kitchen counter and we all have a snack together. Noah gets his own bowl of dip - we don't want to share with him because he triple-dips everything!

We had lots of fun doing "Tot School" activities last week. We worked on identifying big/little, using a glue stick, using an eyedropper, cutting play doh, building towers, playing Memory, and best of all, playing alphabet match-up (the above picture). I set out 10 letter cards that Noah knows, and gave him matching letters from his tub toys. I said, "find the other M" or "find the matching O," and Noah would walk around and look at the cards until he found the match. It was so interesting to see his brain working! The other highlight of the week was using a glue stick. Noah really gets into his gluing, as you can see from some of these pictures. 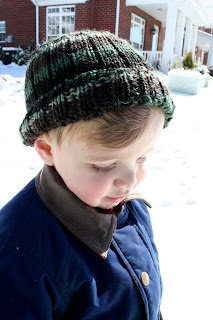 We didn't find something to use as a sled, but we did have fun walking around in the snow. Noah wanted to walk on the sidewalk and hear the snow crunch under his feet. Everytime we crossed a road, the ice was very slippery, and Noah kept saying, "Ice! Ice! Ice!" He thought it was funny to walk on ice, because ice is one of his favorite things to eat. He held my hand the whole time we were outside today, which was so sweet. Here's a few more pictures from our snow day.
Posted by Educating My Own at 9:49 PM

It is a beautiful and peaceful snowy night. The snow began to fall right before Noah went to bed, and we're forcasted to get up to 6 inches of accumulation overnight! The entire Charlotte area will be shut down tomorrow, so we'll enjoy our snow day. Maybe we can find something to use as a sled?