Noah has somehow been teaching himself some of the state capitols by studying his atlas, placemat, and puzzle.  We were playing the ipad game "Stack the States" the other night, and he knew that Little Rock was the capital of Arkansas.  I asked him how he knew that and he said, "I just know."  Really, I don't know how he would know that, except that he has been immersing himself in maps. 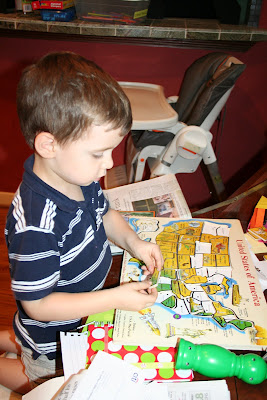 He's been busy memorizing the "Fifty States that Rhyme" song, and when he has it all in his head, he wants us to put a video of him singing it on YouTube.  That's a great goal, so as soon as that happens, we'll let you know!  He's anxious to finish learning the song so that he can learn the song about the state capitals.  Did you know there's a song about state capitols?  I didn't either, but we'll let you know when Noah memorizes that one too!

Posted by Educating My Own at 2:30 PM