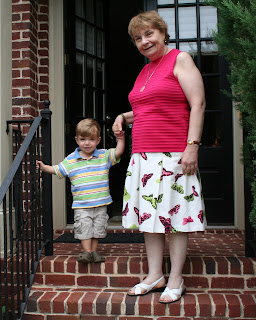 Noah had so much fun serving cups of bottomless coffee from Baubie's play kitchen this weekend. He was also quite the short-order cook as he grilled anything we requested on the play grill. When he served it, he would say, "hot" and blow on it.

Noah has been talking so much more, but this weekend he started something entirely new. He points at everything around him and says, "that!" It's really cute! We heard "that! That!" all weekend and then it morphed into "That, Mommy, that!" or "That, Daddy, that!" A funny story about this new development is that Noah has never said Mitzi's (Baubie's dog) name - he just howls instead of saying her name. However, whenever he would see Mitzi this weekend, he would say, "Hi That!" It was really funny and cute. Here's some more pictures from the weekend.
Posted by Educating My Own at 7:44 PM