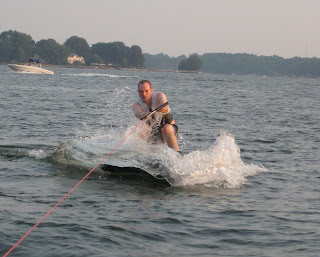 Our friends Stephen and Jamie invited us out on the lake for the evening, and it was so nice to have dinner on their boat and explore some new coves. Their twins Addie and CJ are a little older than Noah. Near the end of the evening, Stephen showed Matt how to wakeboard. Matt has never wakeboarded before, but he's always wanted to try. Matt followed Stephen's instructions exactly and he got up on the first try! It was so exciting! Matt was able to get up three times total before we had to head back to land for the little ones to go home and go to sleep.

Noah watched Matt very intently as he got in the water and was floating behind the boat. Noah's face lit up when he saw Matt wakeboarding on top of the water. But, every time Matt fell in the water, Noah screamed and cried hysterically. He screamed, "Daddy! Daddy!" as the boat continued to speed away for a second or two before slowing down and turning around to go pick him up. Noah was even more distraught when he lost visual contact with Matt. As soon as the boat circled back to pick Matt up, he would yell "I'm ok! I'm having fun!" and wave at Noah. This helped a little bit, but Noah couldn't calm down until the boat was stopped. Between each time, Noah was happy again and wanted to see his Daddy back up on the water. I was really surprised by Noah's reaction, but I had never thought about how strange wakeboarding must seem through the eyes of a two-year-old who has never seen his Daddy pulled behind a boat! Here's Matt's fabulous pictures!
Posted by Educating My Own at 2:47 PM