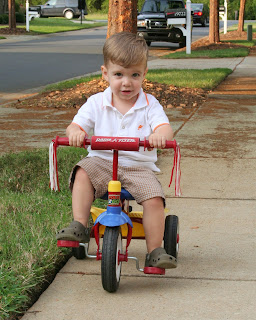 Noah has learned how to pedal his tricycle, and he couldn't be more proud of himself. He's been riding his trike occasionally since his second birthday, and it took him a couple of months to get the hang of it. I had a little rope tied around the handlebars so that I could pull him and he could get the feeling of pedaling. I think his real inspiration was watching Matt ride his bike because he always wants to be just like Daddy. The first time Noah really pedaled by himself, he just kept going and going, and he giggled and laughed the whole time! It was so cute, and it was on September 2nd, when he was exactly 2 years and 4 months old. Go Noah!
Posted by Educating My Own at 2:41 PM