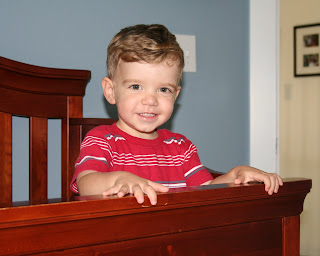 Today is the big day! Noah's big boy room is ready, and he has officially "moved in" to his new room. There has been a lot of lead-up to today, so he was so excited he could barely stand it! The first nap didn't go too smoothly because Noah was pretty sure it was time to run around and play with everything in the room. It was the first time he hadn't been contained in a crib or pack-n-play so the freedom was quite exciting! It took about two hours, but he eventually did lay down in his bed and nap for a while - we consider that a success!

Bed time was a little easier, but it was still more fun to get in and out of the bed and run around the room giggling. He did manage to settle down and go to sleep eventually. We know it's going to take some time to get in to a new routine, which is why we wanted to do this transition long before baby brother arrives. Here's the painting and assembly process for Noah's big boy bed.
Posted by Educating My Own at 8:58 PM