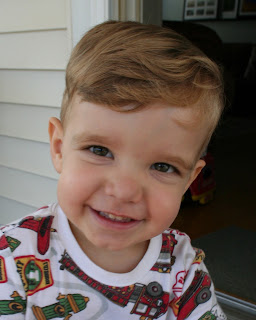 Noah had a fun week this week! He really loves drawing with his new magic markers. He chooses a color and says it's name (his favorite is green, which he calls "een"), then he colors with it and puts the cap back on and says "all done green," which sounds like "ah yah een."

A milestone of the week was that Noah got his first pair of scissors. They're toddler scissors that spring open, so he just needs to squeeze them closed in order to cut paper. He worked really hard on learning how to use them, and he has created lots of little pieces of paper as a result!

He also loves playing in his water table and experimenting with filling and emptying different containers. Also, thanks to Target, we have a new stock of stickers so Noah can cover paper with stickers, another of his favorite things. Here's our play pictures from the week.
Posted by Educating My Own at 8:28 PM