A Boy and His Puppy and His Dog 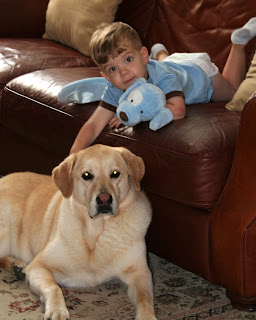 We asked Noah if Emma is a dog, and he said "puppy." He really does think Emma is a puppy with boundless energy, which is great because in reality, she's ten years old and starting to show her age. Noah absolutely loves playing with Emma, and he thinks that everything she does is funny. He laughs hysterically when she scratches the carpet before she lays down, and he loves chasing her around the house. He is devoted to feeding her, and he gets her bowl and scoops the right amount of food in it (with supervision, of course!) twice a day. He gets very upset if he's not the one feeding Emma. The sweetest thing is when he hugs her tight and says "Emma Emma Emma." He loves this dog so much!

The other dog in Noah's life is his puppy, who he sleeps on like a pillow. Sometimes puppy stays in the crib during the day, and sometimes Noah wants puppy to come downstairs and play. Noah loves using his imagination with puppy, and it's so cute to watch. Today, puppy was driving a firetruck, then he was playing Connect Four and holding the little game pieces in his paw.
Posted by Educating My Own at 8:33 PM