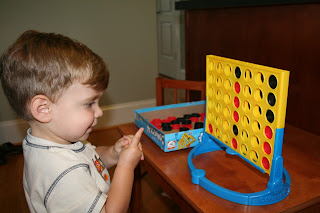 Noah's newest favorite game is Connect Four. He gets a kick out of dropping the pieces in the game board and watching where they land. In the above picture, he's saying that he just put in one red piece. Noah currently plays with it in an unstructured way, just like how we play Hi Ho Cherry-o. Sometimes we do practice taking turns and dropping in pieces. I think he'll have fun making patterns with the colors soon, and there's lots of other ways we can play without actually following the rules.

We also had a fun evening playing at the Sandbox Park in Davidson. Much to Noah's delight, we were the only people there. There's a huge sandbox with all sorts of toys, and there are lots of riding toys to try out. The thing that was even better than the sandbox and all the toys was the fact that Matt was there too! We've been to that park lots of times, but never with Daddy! That was the best part to Noah!
Posted by Educating My Own at 8:44 PM