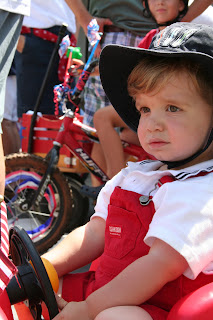 Wow! What a day! Matt started off the day by running in the Firecracker 5K while pushing Noah in the jogging stroller. He made great time, and Noah was quite relaxed in the stroller while Matt worked hard at pushing him.

We went out to breakfast with the Lords, then we went to the Fourth of July parade at Birkdale. Noah had a great time looking at the firetrucks and hanging out with his friends. Laura pushed him around the parade route in his red car, which was decorated for the fourth.

After a long nap, the Suteks came over for BBQ, then we went to the Davidson Concert on the Green and enjoyed some great music as the kids played. It was a full, fun day!
Posted by Educating My Own at 8:14 PM