Have I mentioned that Noah loves to follow sports?  He actively follows Michigan football and Panthers football in the fall and Michigan basketball in the winter.  He filled out a NCAA basketball tournament bracket (which he predicted Michigan would win, of course!) and closely followed every game of the tourney.  He checks www.mgoblue.com almost every day for updates and press releases about the next football and basketball season.  He's even followed the NBA draft as one of his favorite basketball players just turned pro.  He has turned into quite the sports nut!  He loves following the action of the seasons.

We were just entering into a lazy summer lull of sports when Noah and Issac became racing fans.  So, now Noah is intently following Nascar racing.  They had seen glimpses of races on TV before, but they didn't have a connection to a specific driver, so there wasn't too much interest.  All that changed about two months ago.  It's a funny story (well, at least it's funny to me!).

I got an email from another mom at Noah's school saying that one of the race shops near Noah's school was going to have a fan day.  The race shop would be open for tours and there would be a pit crew demonstration and free bouncy houses for the kids.  I thought that sounded like a lot of fun and the boys would get a kick out of it.

Side note:  We live in Nascar racing country.  All the race teams have their headquarters within a few miles of our house.  Noah's school is next door to the Charlotte Motor Speedway and we are all thoroughly entertained two times each year when we watch all the RVs come in to town before the big races.  We drive around and pick out our favorite RVs for our future cross-country RV trip.  Racing is big business around here.

So, back to the story.  Noah, Isaac and I went to the fan day at Chip Ganassi Racing.  We sauntered in and expected to get to that free bouncy house and jump the afternoon away.  We were surprised to see hundreds of people in a line.  Everyone had on some type of racing apparel and/or something race-related in their hand.  The family in front of us had an extensive binder of autographs from Nascar drivers.  The family behind us had taken their kids out of school for the day and the daughter was carrying the door of a race car.  We had no idea what was going on - where was the free bouncy house?

It seemed like we were in line for autographs, but who were we going to meet?  I didn't want to reveal that I was completely clueless about the situation so I didn't want to ask the other people in line what was going on.  I went to the Chip Ganassi website and handed my phone to Noah.  I whispered to him "read about this racking team and find out who the drivers are."  Noah found out that their drivers are Jamie MacMurray and Kyle Larson.

Since we were apparently now in line to meet the drivers, I had to figure out what we had that they could autograph.  Receipts from my purse didn't seem appropriate, so I sent Noah looking around the race shop to see what he could find.  He came back with free mini posters with the driver's pictures and career information.  Phew!  Now we wouldn't have to give up our cover that we were completely clueless! 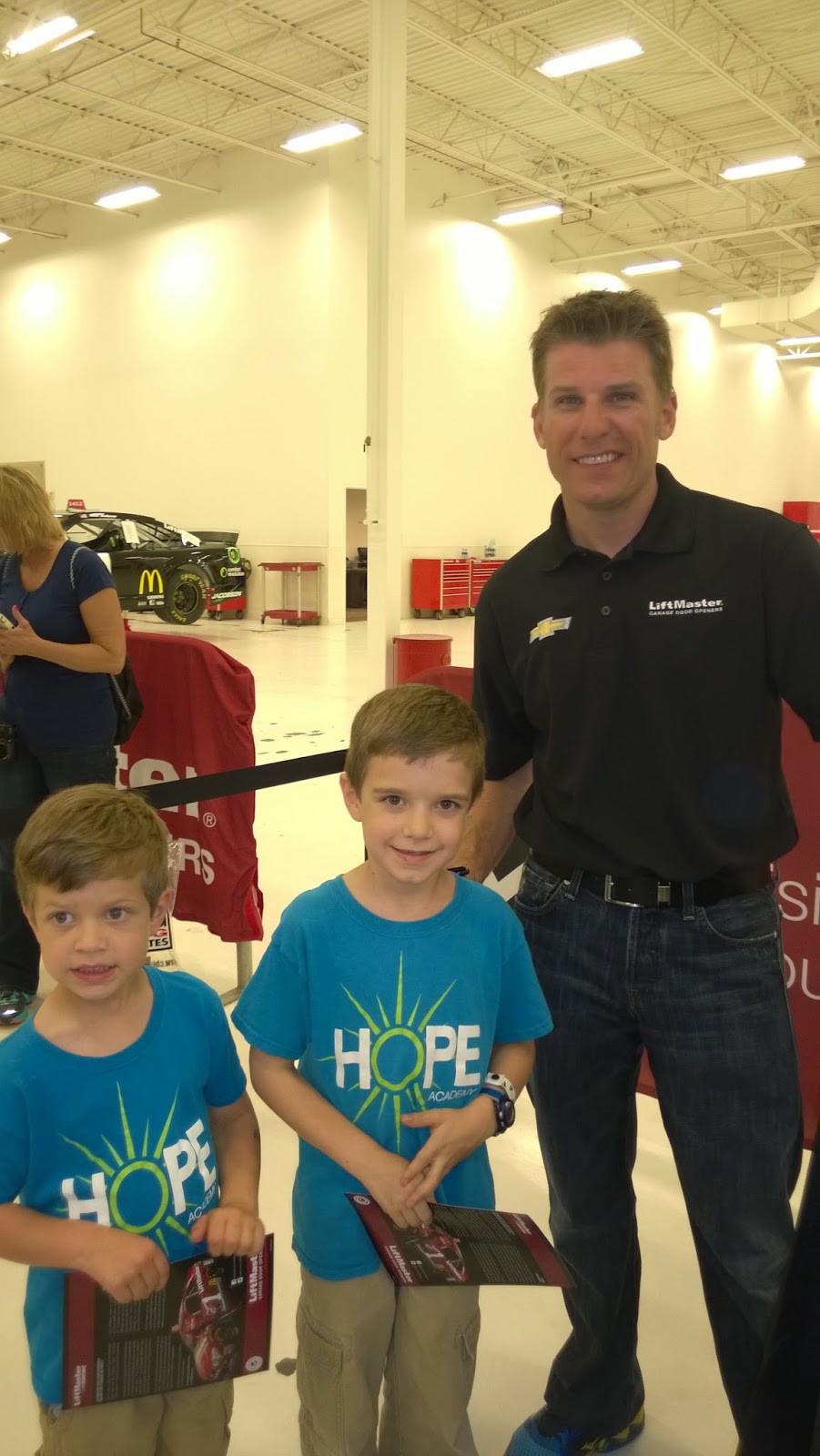 We ended up meeting the drivers, and Jamie MacMurray instantly became Noah's favorite.  He drives the #1 (McDonald's/Cessna) car and has a long history of racing success. 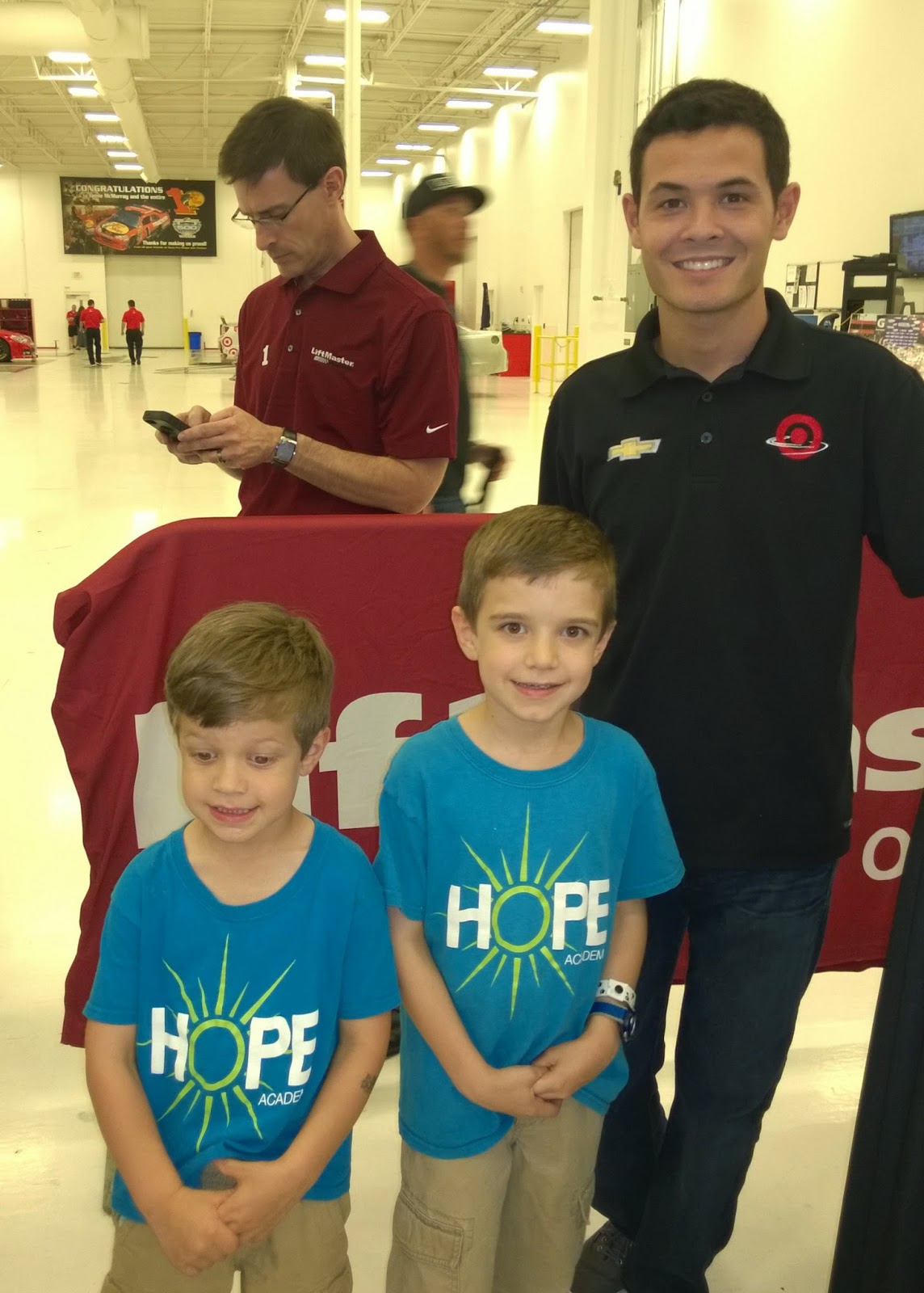 Kyle Larson instantly became Isaac's favorite.  He drives the #42 Target car and he's on track to become the rookie of the year this season.

We never made it to the free bouncy house and we didn't stay long enough for the pit crew demonstration, but two new fans were born on that day! 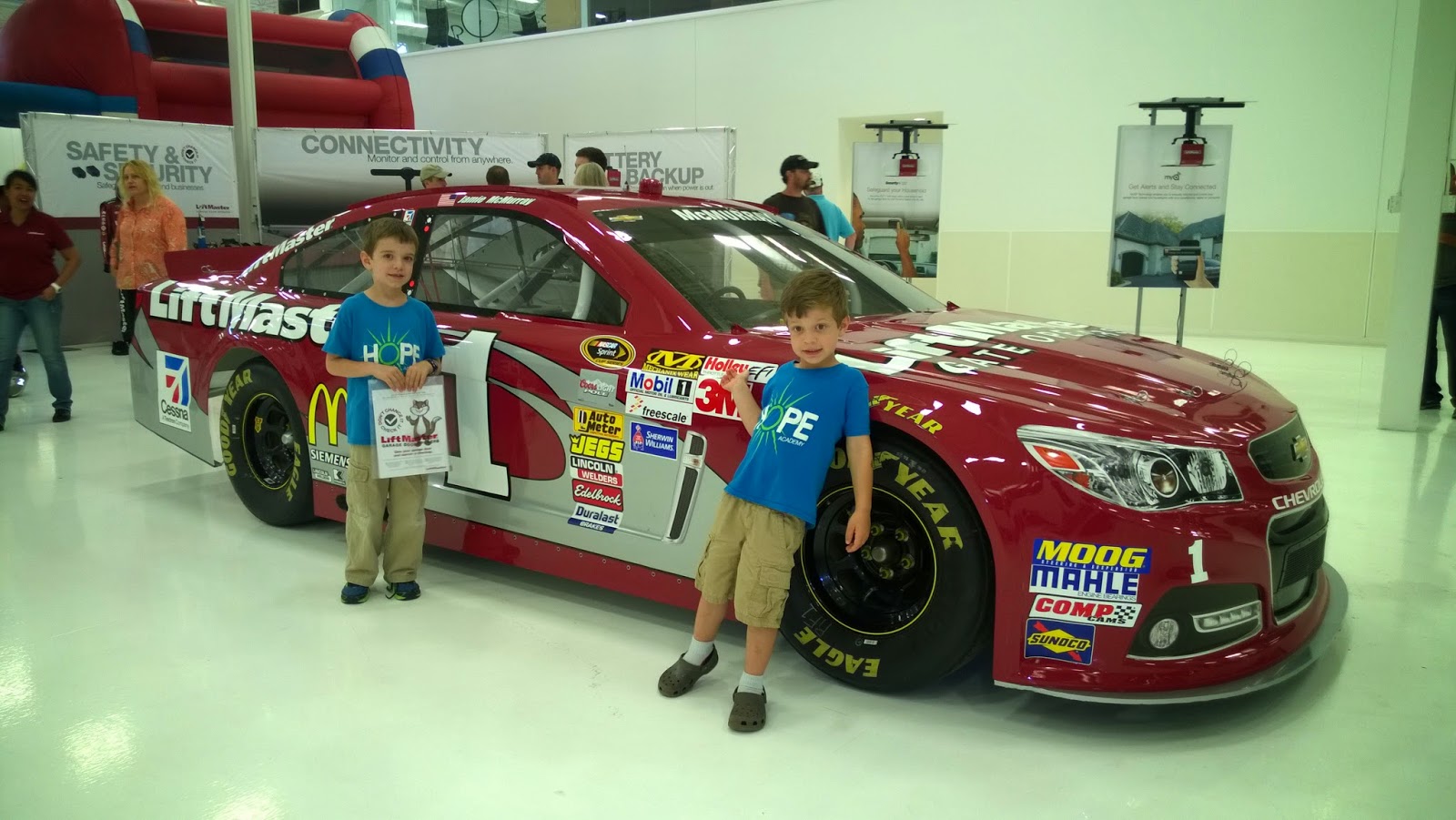 The next surprise was that we were given free passes to Pole Night for the CocaCola 600.  The boys were over the moon that they got to go to the Charlotte Motor Speedway.  Pole Night was perfect for us because they got to see their new favorite drivers race, and we didn't have to endure the hours of a real race. 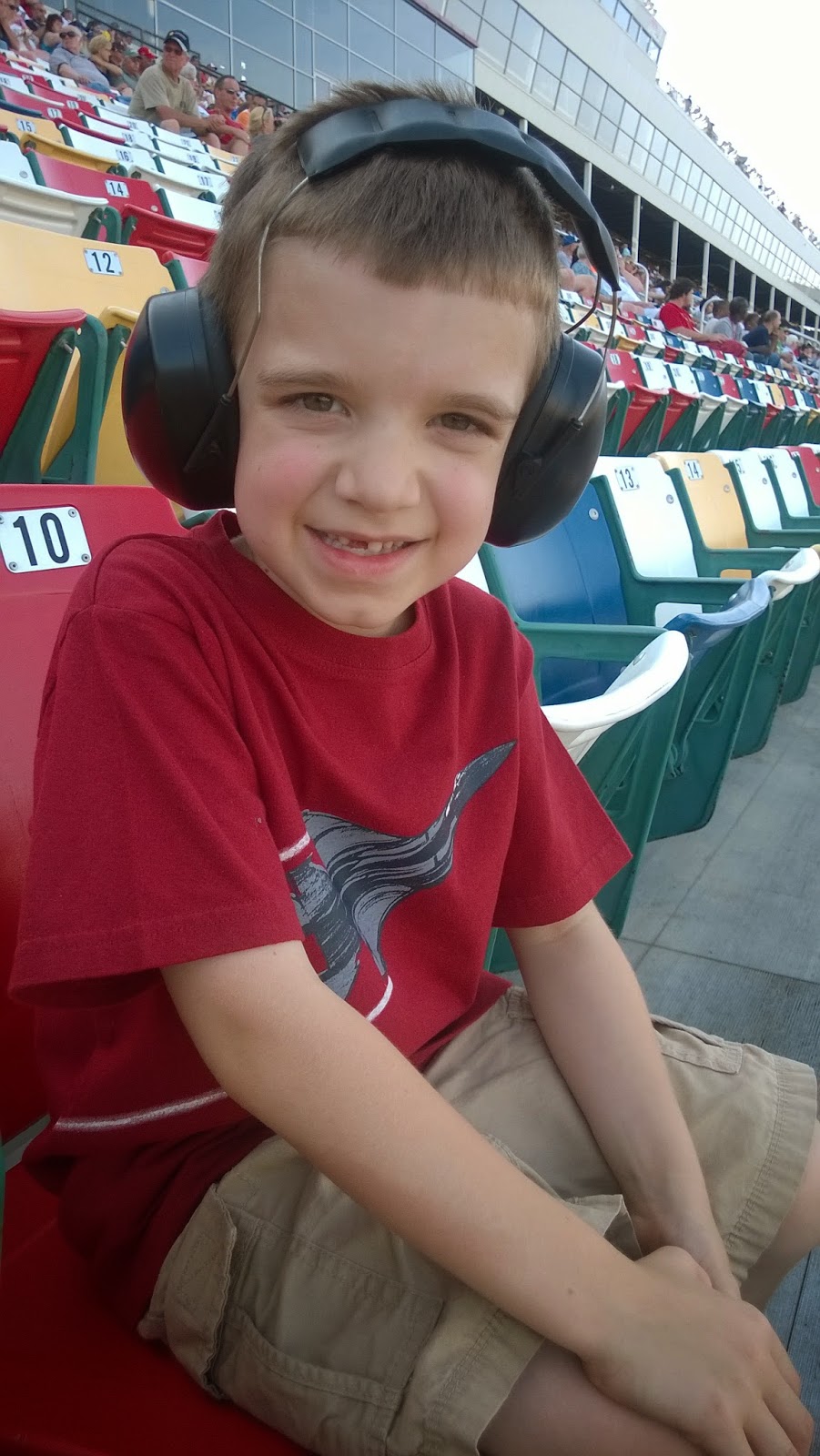 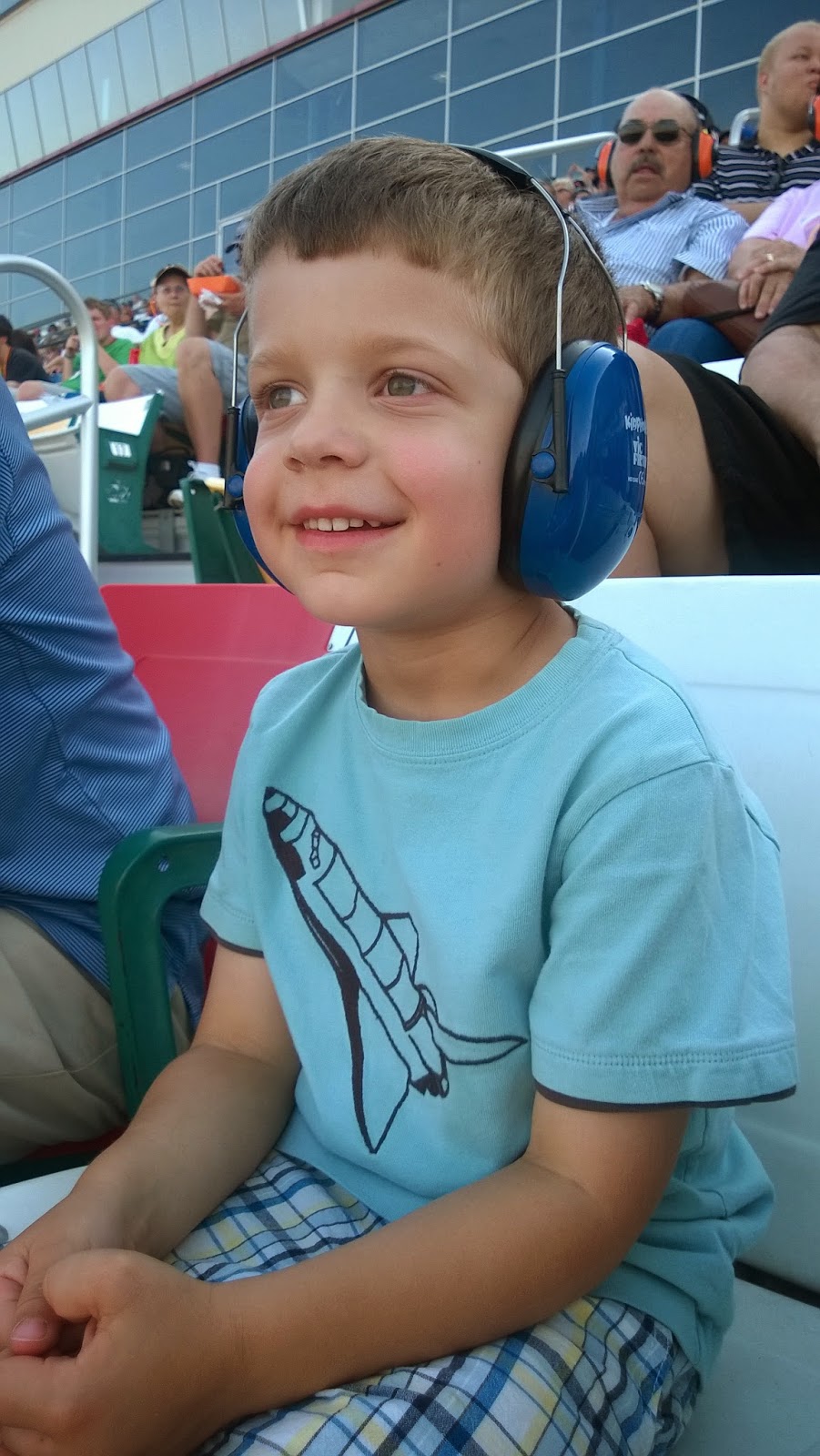 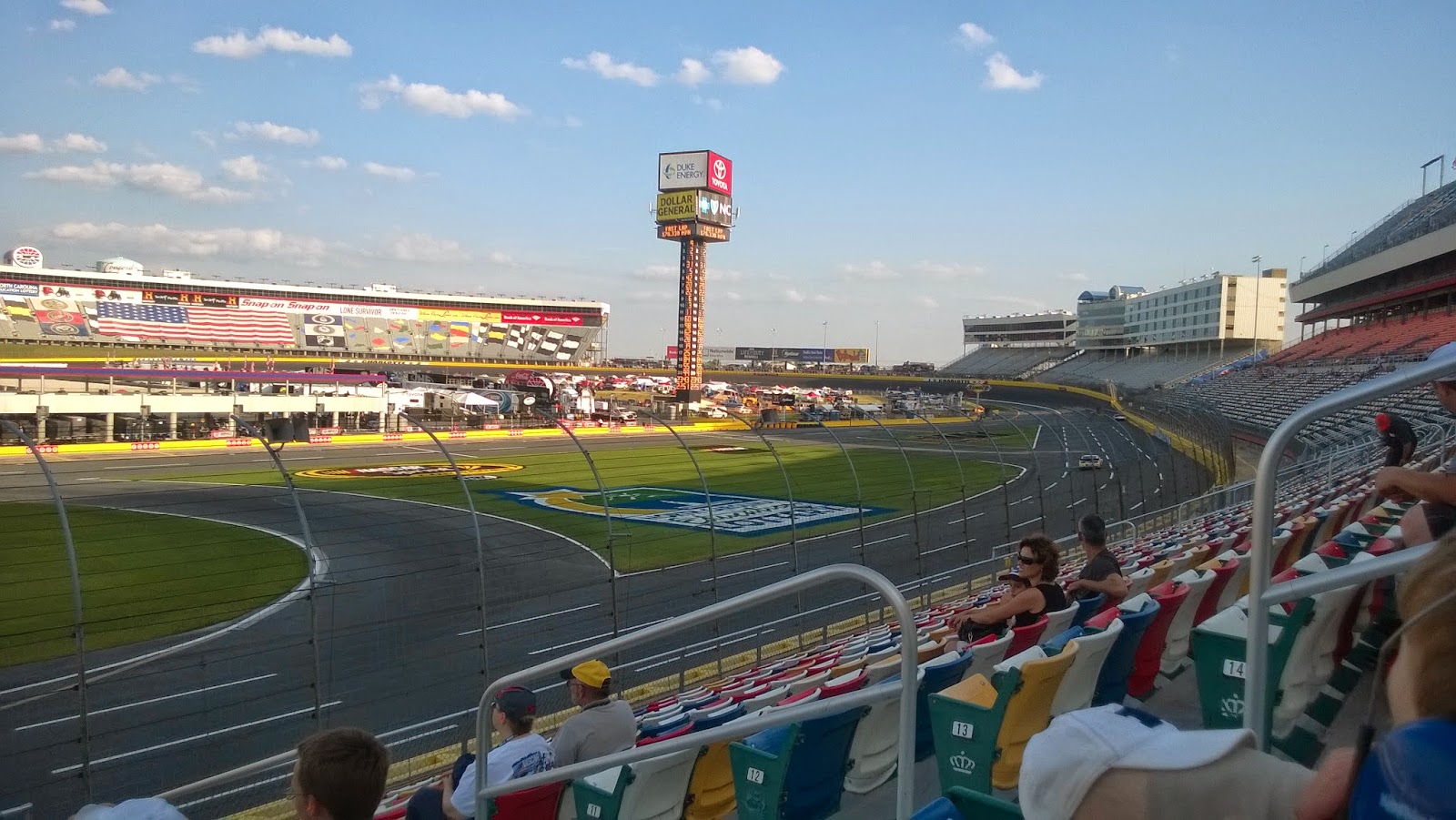 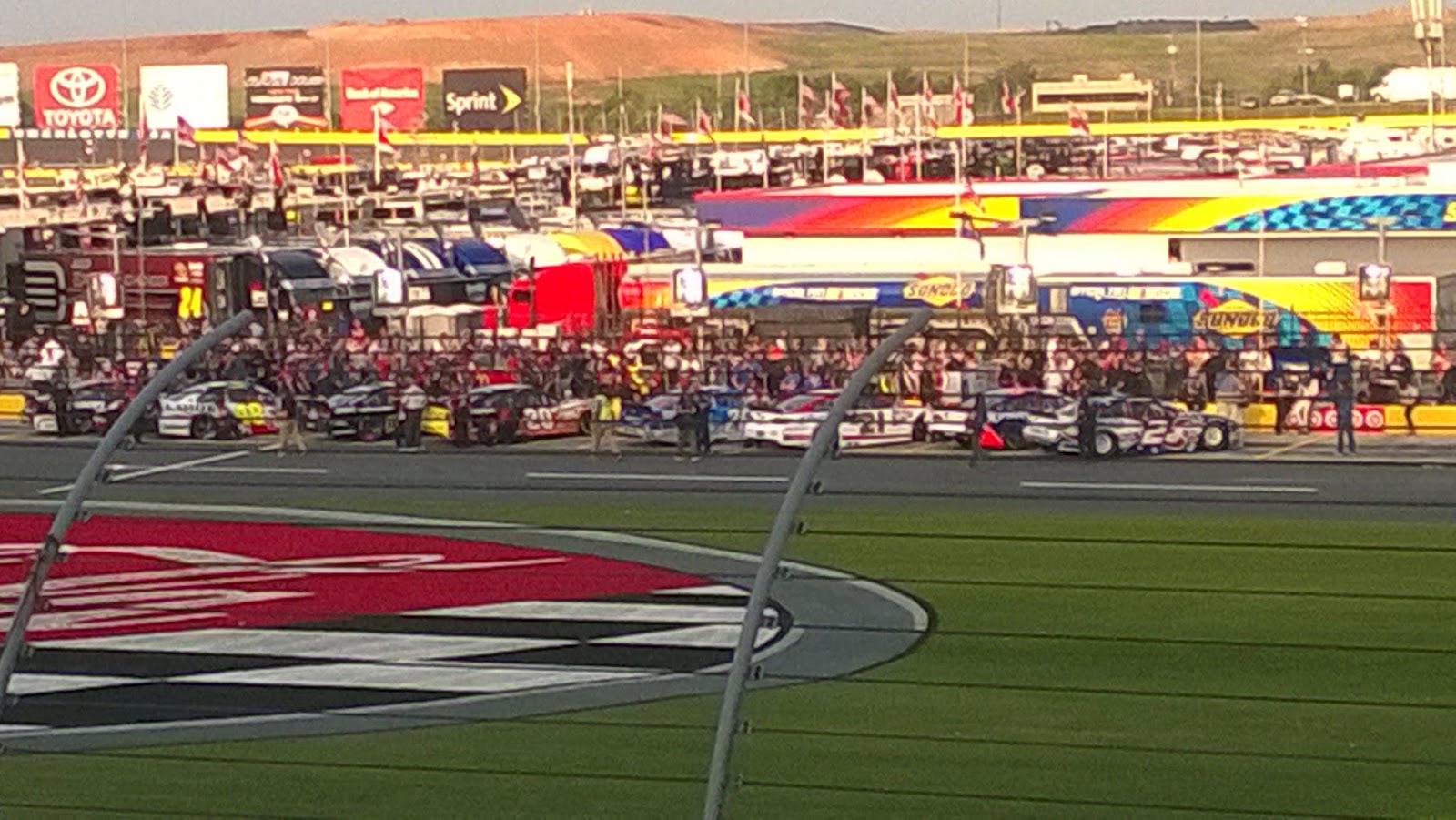 So, now we're racing fans!  It's funny that we've lived in the south for 13 years and we never took an interest in racing.  But it just took a personal connection for the boys and they're on board now!

Noah follows the results of every race and keeps track of the stats for both drivers.  So, now he has a summer sport to follow also!

Posted by Educating My Own at 2:49 PM