Last week I looked around our house and realized it was time to dust.  But I didn't do it.  I just thought about doing it.  It was one of the first times that being a procrastinator payed off!
Last Tuesday, I was baking cookies to bring to a teacher appreciation lunch at Noah's preschool.  Thankfully, Matt was home at the time and he switched out cookie sheets for me while I was helping Noah with something.  But that's not what I'm thankful for.  While he was taking out the cookie sheet, he noticed that our oven was sparking.  He called me over and we could see large sparks coming out of the fan holes in the back of the oven.  We could also see a flame that was getting larger and larger behind the oven.
Matt always thinks clearly under stress, so he turned the oven off and closed the door.  But, the sparks and flame grew larger.  Matt knew where our kitchen fire extinguisher was, and he found it and sprayed inside the oven.  Even after that, we could still see sparks and flames.
Still calm, Matt told me that I should go wake up Isaac from his nap and take him and Noah outside while he calls 911.  About 2 minutes later, the firetruck was at our house and the firemen pulled the oven out of the wall , put out the flames and that was it.  Thankfully, the fire did not spread to our house!
I am so thankful that Matt was home at the time.  He remained calm and was able to think, which made me calm.  Even though I was calm, I still wasn't able to think clearly, but I trusted that he could.
But that's not where the story ends.  After the firemen left, we went inside to survey the damage.  There was no fire damage, but there was a whole lot of white powder.  Everything in our house was coated white.  It was unbelievable!
I have since learned that kitchen fire extinguishers are filled with sodium bicarbonate, which is baking soda.  It's harmless, but no one wants a house coated with baking soda. 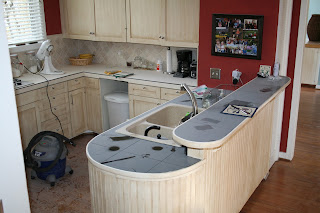 Here's our kitchen counters.  Note that the counters on our peninsula are black.  You have to look hard to see it, but it's true. 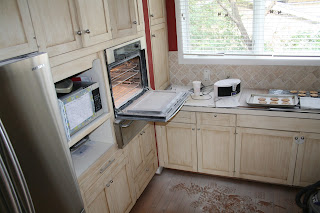 Here's the culprit, and the cookies that I'm sure would have been delicious.  I ended up bring cookies from the Harris Teeter that I'm sure were only average. 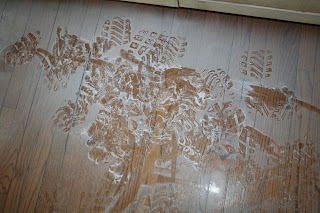 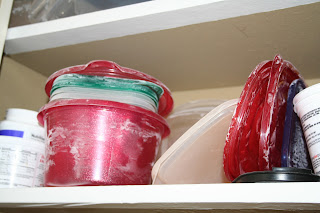 But, it wasn't just in our kitchen.  We needed to air out the house after the firemen left, so we opened up all our doors and windows.  Later in the day, this is what our playroom looked like.  Our playroom is nowhere near our kitchen.  The boys had lots of fun drawing in the powder on the playroom's hardwood floor. 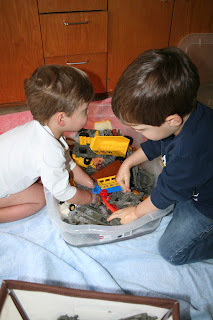 The next day, the boys had a blast washing all the toys that had been out in the playroom.
So, as a result of our oven fire, and a whole of cleaning, everything in our house is completely clean!  It's quite wonderful!  We even needed to wash our windows.  Spring cleaning came early - if only we can keep everything clean until spring!