Noah has his own email address, and he eagerly checks it every day. He loves sending and receiving email. Sometimes he dictates to me and I type his emails for him, but he mostly prefers to type them himself. When he's in charge of typing, he types as many random letters as he can, then he adds all sorts of emoticons just for fun.

The main recipents of Noah's email are Baubie, Grammy, and Yaya, but he sends the occasional email to friends and family and he's tickled pink when he gets a reply.

But there are days when he checks his inbox and only finds a one or two new emails. He really does prefer to have about 7 or 8 emails in his inbox, so he just sends himself about 5 emails and giggles when he opens them and reads them.

I have created "folders" for his emails, so when he gets a new email, he reads it, replies, then puts it in the correct folder. He likes organization like that. He said, "When I am a man and I have a job, then I can just make new folders for the email that I get when I'm at my job." Always thinking ahead, this one is.

One day Noah decided that he wanted to introduce Isaac to the exciting world of email, and I snapped these pictures: 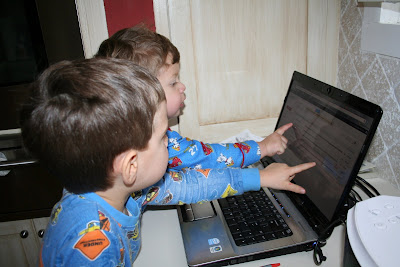 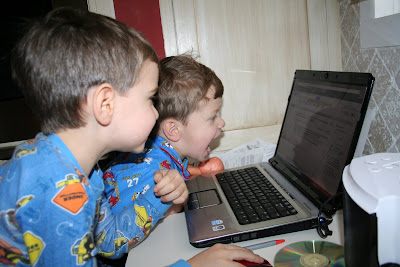 Noah opens an email for Isaac to see, and it has little emoticons in it.

The little pictures are smiling right at Isaac, and I love his complete surprise and delight! 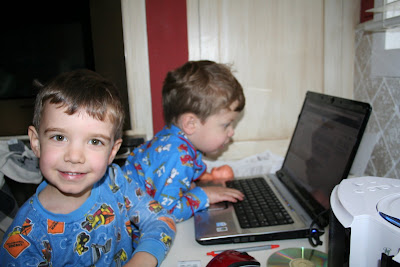 Noah says, "See? I knew it! I knew Isaac would like email too!"

Posted by Educating My Own at 9:05 AM