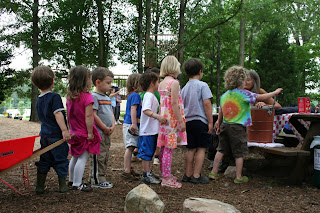 We wrapped up Noah's year at The Children's Schoolhouse at the end-of-year party in May.  Noah and his classmates made ice cream the old fashioned way.  Here, they're waiting to take their turn at the crank. 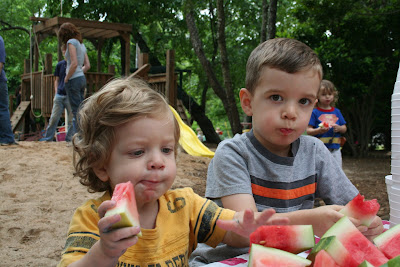 Noah and Isaac tried to convince me they needed to eat all the watermelon themselves. 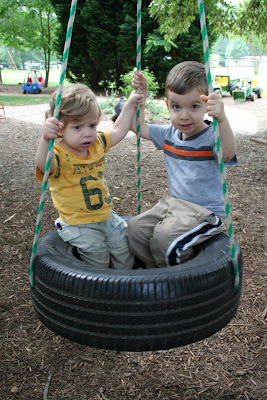 Riding the tire swing is a big deal.  Noah first decided to try it just a few months before school ended. 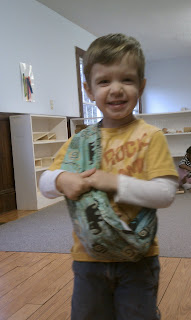 One of Noah's many favorite things about school was the "school babies."  There were four babies that he would take care of every day.  He has a baby in the sling in the above photo.  That's a happy boy taking care of his baby, isn't it?  He would be sweet and hold them one minute, and the next minute, he would put them in the oven because they were crying too much.  Maybe that's how boys play with dolls?
One morning, Noah's teacher, Miss Tara, told Noah about a fun activity they were going to do: hammering with real hammers.  Noah looked excited for a minute, but then looked sad and walked away.  I wasn't sure what to make of it, but later in the day when I picked up Noah, Tara said that she had Noah's reaction figured it out.  Noah had looked sad because he couldn't figure out how hammer and hold his school baby at the same time.  Tara showed him how the school baby could sit on a chair and watch him hammer.  Noah was happy with that, and then he could do his hammering.
Noah likes to make pretend phone calls, and while we were at home, he would frequently pretend that the phone was ringing and that the school babies were calling him.  Most of the time, they were crying.
Noah's main concern about leaving the Schoolhouse was wondering about who would take care of the school babies.  We wrote a note to Miss Tara and asked her to please take care of the school babies for Noah.  I'm sure she is.

Posted by Educating My Own at 7:32 AM