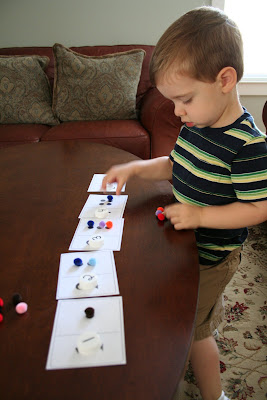 Noah has been very interested in letters since about the time he could walk. Numbers, on the other hand, held no interest for him. That is, until now. A few weeks ago, Noah became receptive to learning how to count correctly (he has loved counting things for a while now, but kind of did it his own way, and the number four was never used for some reason!). Things have now clicked and he's counting everything he sees. It has been so fun to watch him become interested. I got out some number and counting activities, and he sailed through them and thought they were fun. He even regularly uses the number four. It's so cool to be three!

Posted by Educating My Own at 6:27 AM