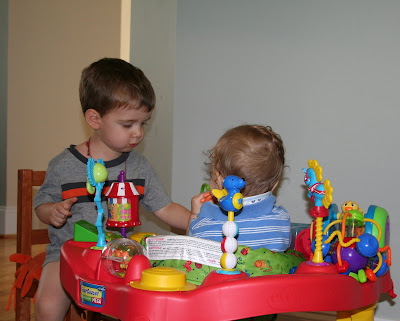 I was making dinner while Noah played by himself and Isaac played in the exersaucer. Isaac likes the exersaucer, but was starting to let me know that he was ready to get out. As I was cooking, I turned around and saw that Noah had pulled up a chair and was playing with his brother, who was now quite happy. Hmm...is that what people mean when they say that siblings are built-in entertainment? It was such a sweet moment.

Posted by Educating My Own at 6:08 AM