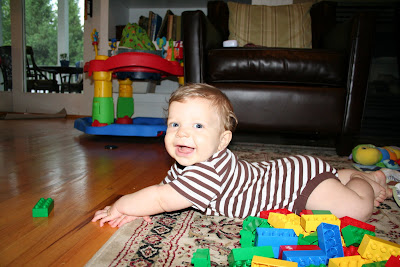 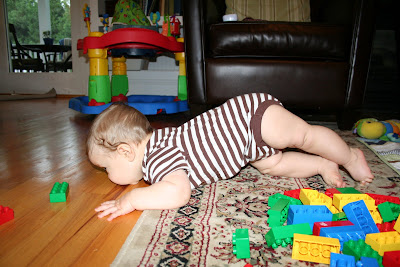 Isaac is officially on the move! He is starting to see-saw (pre-crawl), where he puts all his weight on his face on the floor and pushes forward with all his might using his legs. Using this sheer brute force, he can really move places! In this series of photos, Isaac moved at least six feet through a combination of see-sawing, rolling and pivoting.

I sat him up on his play blanket with his toys and went in the kitchen to make dinner. The next time I looked over, Isaac had gotten on his belly and he was already off the blanket! His only goal was to get himself to the Duplo house that Noah had just created. It was a lot of motivation because he worked very hard to get there! I wasn't sure what Noah's reaction was going to be to his brother's interest in the Duplos because he had just worked hard to build the house. Noah came over and helped me cheer Isaac on toward the house, and when Isaac reached it and began to tear it apart, Noah helped him by completely dismantling it and piling all the blocks up for his brother to play with. Noah thought it was pretty cool that Isaac could move so far!

Posted by Educating My Own at 1:10 PM