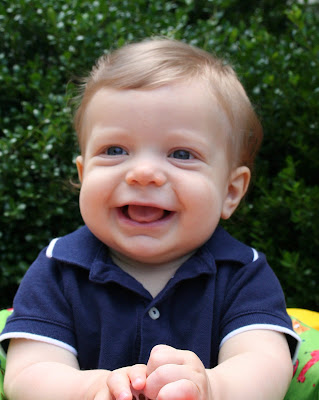 This month has been a month of playing! Now that Isaac is a sturdy sitter, he has been sitting and playing with toys for long stretches of time. His current favorite toys are a firetruck and the ball machine. He can easily go from sitting to laying on his belly, and as you saw in the last post, he's starting to move around now. This next month is guaranteed to be a fun one for Isaac!

He loves our daily routine around the house, especially when we go play on Noah's bed after nap time in the afternoon. Isaac loves to roughhouse and he and Noah start off hugging but end up rolling around on the bed while laughing. Isaac is surprisingly strong and can hold his own against his brother. Bathtime is one of his favorite things, too. He loves to splash and play with his bath toys, and he thinks it's even more fun when Noah takes a bath with him for extra splashing. He also loves our daily after-dinner walk around the neighborhood. He usually dozes in the stroller and then is ready for bed when we arrive back home.

Isaac went on his first trip this month when we visited Baubie, and he did great on the trip. He is also making lots of noises now, his favorite is "Ah ya ya ya ya," which we sometimes hear all day long.  As the month as progressed, he has developed more strong opinions about what goes on in his life.  I'll post the story of the highchair later this week.

Isaac, you're no longer content to watch from the sidelines.  You're becoming able to get yourself in the middle of everything that's going on.  We love you and have been blessed by you for seven months now!

Here's some other photos from our photo shoot.

Posted by Educating My Own at 9:07 PM