We're Happy to be Home 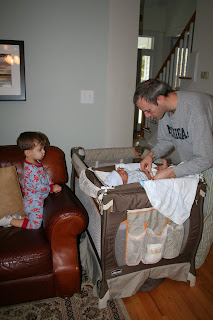 We brought Isaac home from the hospital yesterday afternoon, which was about twelve hours earlier than expected. Laura and Isaac were doing so well that the doctors released us whenever we were ready to go home. We couldn't wait to introduce Noah to his new little brother, so we chose to come home early.

So far, Noah has been very curious about Isaac and has been observing him from afar. He loves that Isaac's clothes have lots of snaps, and he likes comparing the sizes of their diapers. He likes to turn on music for Isaac to listen to, and he has been keeping track of where his little brother is and what he is doing.

Little Isaac had a very contented day today, his first full day home. He was quite happy to eat and sleep all day. He wasn't bothered at all by all the noise his big brother was making, although Noah's drums are currently out in the garage, so it was a relatively quiet day around the house. As the day is winding down, we're hoping he continues to be content throughout the night, as we dream about getting a few hours of sleep.

Here's some other pictures from the hospital and home.
Posted by Educating My Own at 10:40 AM