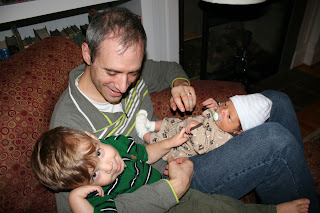 We've been a family of four for more than a week now, and we're starting to feel like we're settling in. Matt has some time off work, and it's so nice to have some true family time together.
Isaac is a happy baby, and he is doing a great job of eating and sleeping. He has lots of cute facial expressions and frequently smiles. He is not bothered at all by his noisy big brother, and we have sound that he can sleep through anything. While he is napping, we can have the radio on, Noah can play his drums, and we can carry on a loud conversation - all while we're all in the same room. Isaac has had nine months in the womb to get used to all the noises, so he says it's no big deal. The funny part is that when Isaac cries in the middle of the night, he wakes up Noah, who is used to his peace and quiet while he sleeps. Speaking of middle of the night, Isaac is currently going four hours between feedings at night, so that means I can sleep in blocks of two blocks of three hours, plus an extra hour or two of naps. That's not too bad!

Here's some more pictures from around the house.
Posted by Educating My Own at 8:27 AM