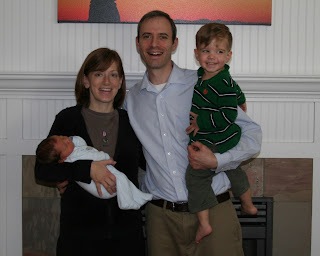 We hated to say good-bye to Grammy and Yaya yesterday. They stayed with us for a week and a half and became essential parts of our life and survival during that time! Noah thrived on being the center of their attention while Matt and I went to countless doctor and acupuncture appointments last week, and during our time in the hospital with Isaac. Also, the time change occurred right when we came home from the hospital, so that meant that Noah was waking up bright-eyed at 6am. Grammy is an early riser and was happy to fix him breakfast and play while Matt and I tried to get some more sleep.

Who knew that getting a new baby brother could be so much fun for a two-and-a-half year old? We took some family pictures, which you can see here.
Posted by Educating My Own at 11:07 AM