...when your car's radio stops working. 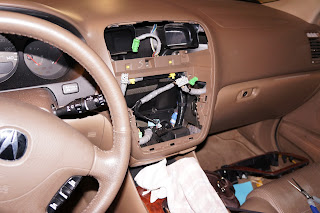 When the radio stopped working, Matt thought that the fuse might have blown, so he replaced it.  The new fuses didn't work either, so he Binged (we don't Google anymore) the problem to see what the solution might be.  He read that the problem is most likely that there are coins inside the tape player, and the coins are causing the whole unit to malfunction.

So, he looked in the tape player with a flashlight and saw coins...lots of coins...and some paper money too.

Hmm, how could that have possibly gotten in there?

Instead of taking the radio in to the dealership and paying some huge amount of money, Matt decided this is a perfectly good do-it-yourself project.  So, out came the radio, and he spent at least an hour shaking it upside down and using different instruments to try to get all the money out.

It turns out that the paper money was a $10 and a $20 bill.  I always have the feeling like I can't keep track of my money in the car, so now I know why!

When all the money was out, Matt put everything back together and it works as good as new!

Noah later told me that he and Isaac had been playing "toll booth" in the car, and they needed a place to put the money when a car went through the toll booth, so they put it in the tape player slot.

Needless to say, I'll be supervising them more when they play in the car, and I'm not leaving any loose change in there either!