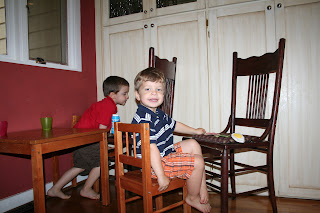 Since Noah is fascinated with NASA and all things space related, it's only natural that his imaginary play time revolves around space too.  In this picture, Noah and Isaac are preparing for a mission to the moon.  When they play, Noah is always Neil Armstrong: pilot and commander in charge.  Isaac is always Buzz Aldrin: co-pilot.

Buzz takes it upon himself to provide food for the crew.  In this picture, he has just made some eggs.  A few minutes later, he brought all sorts of kitchen gadgets and pretend food into their capsule so that they would have enough to eat.  Being a co-pilot is a big responsibility.

When they reach the moon, Neil is always the first one down the ladder, and Buzz follows right behind.  Neil takes great pains to make sure history is appropriately acted out and sometimes he even puts the American flag on the moon.  Buzz is happy bouncing in the moon's low gravity. 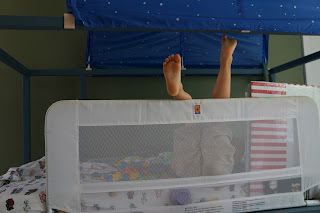 This is a common sight around our house. 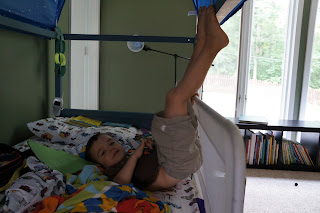 Neil is strapped into his seat atop Apollo 11, waiting for booster ignition.  Buzz ran out to get more supplies, and he'll be right back!