I wanted to share a few pictures I took of Isaac on Noah's last day of preschool.  During this last school year, Isaac and I had 3 mornings a week to ourselves.  Sometimes we would go to a playground and play all  morning then eat a picnic lunch.

Other days we would run errands.  Isaac was always a great helper as long as we went to one or two stores.  The third store was always a deal-breaker for him.

Sometimes we would come home and play and just enjoy some fun time together doing whatever looked interesting around the house.

Whatever we were doing though, Isaac loved having my complete attention, and it was a special time for the two of us to be together.  It was a time for Isaac to just be two years old and not have to get caught up in sibling rivalry for a few hours. 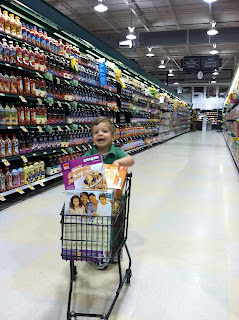 On Noah's last day of preschool, Isaac and I went shopping at a nearly-deserted Harris Teeter.  Isaac loved pushing around the "tiny cart" and we stuffed it full until it was overflowing.  He would slow his cart down whenever we passed someone and look at them in the eye and wait until they complimented him on what a cute shopper he was.  Then he would smile and speed off again. 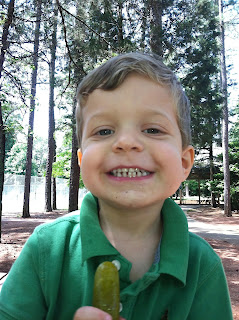 Then we went to a playground and played on the swing and slide, and ate a picnic lunch.  Isaac is beaming in this photo because the "pickle fairy" left him a huge pickle in his lunch. 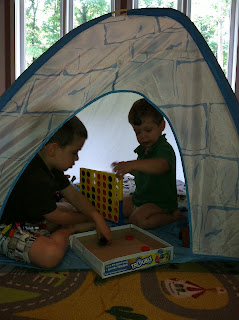 Then we were off to preschool to pick up Noah.  After Isaac took a nap, the boys had fun playing Connect Four in the tent in the playroom.

Isaac will start two-year-old preschool in the fall.  He is SO excited that he finally gets his turn to go to school, after spending the first two years of his life dropping off Noah at school.   Between Isaac's preschool schedule and Noah's kindergarten schedule, Isaac and I will still have one day of Mommy and Isaac time every week.  I'm really looking forward to those days and already planning some fun things we can do together.

Posted by Educating My Own at 7:38 AM