Please excuse the photos in this post - they're all blurry!  I had my camera on the wrong setting and didn't realize it.  But, these photos represent a major event in Noah's life, so I still wanted to post them.

Noah has never liked bouncy houses.  He has avoided them for all of his almost five years.  He doesn't like the way the fan is always loud and the sound of the blowing air in the plastic.  He especially doesn't like the hoards of screaming kids that can be found inside a bouncy house.  Fortunately, bouncy houses are easy to avoid, and that's what we do.  Except for one birthday party Noah attended at Monkey Joe's which is an entire world of bouncy houses.  That was a little bit like torture for Noah while he waited for cake and pizza while all the other kids jumped.

But then, Noah was invited to a birthday party at Sky High, which is a trampoline gym.  I spent a long time singing the merits of trampolines and pointing out how they're nothing like bouncy houses.  We watched videos on You Tube of kids jumping and having fun at Sky High.  It was bouncing therapy.  I guess I became a bouncing therapist.

Then, there we were on the day of the party.  We checked in and took a look around.  Noah hesitated when he saw all the screaming kids, but I insisted that he give it a try. 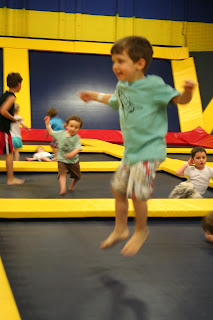 He had a great time! 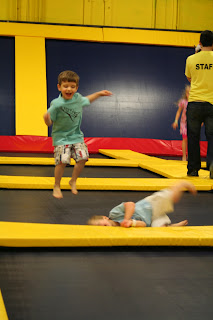 Oh, I forgot to mention that Isaac went to the birthday party too.  He's the blur in the bottom of the photo, screaming with laughter as Noah's jumping bounced him around on the trampoline after he had fallen down. 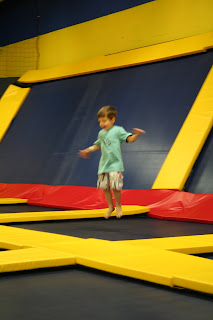 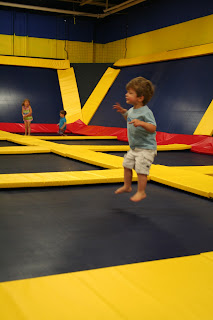 and the little happy jumper.

The only sad part of the day was when we had to go home.

Oh, and now Noah gets it.  He gets how fun it is to jump.  Just today, he jumped in a bouncy house at the carnival at his preschool.  It was a big, noisy bouncy house and there were lots of other screaming kids in it at the same time.  But Noah jumped and had a great time!  Yeah!