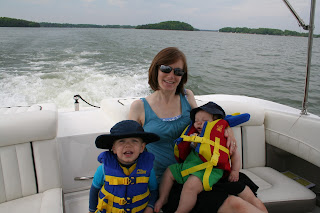 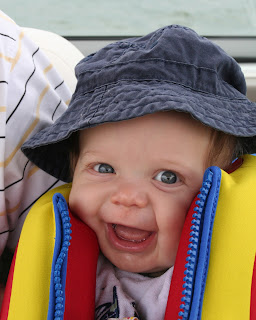 We went on our first boat ride of the season on Saturday, and it was also Isaac's first boat ride ever. The forecast called for a beautiful sunny day, so we headed out to Lake Norman. We were out on the boat by 10am, and it was still overcast, chilly and windy. We were hoping that it would become sunny and warm during our ride, but that didn't happen. It was still fun to be out in the boat, though. We ended up eating our lunch early and heading back to the marina because the wind didn't make us want to linger on the lake too long. When we pulled up to the marina in the morning, Noah said, "Where's my white boat?" We keep telling him it's really Chris's boat, but in Noah's mind, we own our own boat.

I just have to take a minute to love on* our baby Isaac. Take a look at him in the above picture. There he is, squeezed into an incredibly uncomfortable infant life jacket, his cheeks getting squeezed, and the wind was almost blowing his hat off. You wouldn't know it, though from the sparkle in his eyes and the smile that lights up his own face. He has such a bubbly personality, and combined with those edible cheeks, it's just too much.

* We've lived in the south for long enough now that I can correctly use "love on" in a sentence. However, it comes across better in writing. If I try to say it like a southerner it doesn't come across right. It sounds like I'm making fun of how people talk around here :-)

Posted by Educating My Own at 1:30 PM