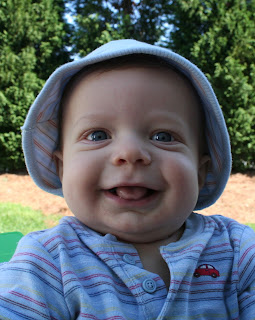 Wow! Our little boy is not so little anymore! Isaac has done so many new things in the last month, like sitting in the Bumbo chair and playing in the Exersaucer, but the real fun has come from seeing his personality continue to develop. If you try and entertain him, he thinks that almost anything is funny, especially if it involves making crazy noises and motion. He is completely in love with his big brother and watches him intently whenever they're together. He also pulls on Noah's shirts and loves to get a good grip on his ear or hair and pull really hard. Noah takes it in stride and says, "Ouch, baby!"

Isaac started eating baby food this month, and his menu of food options currently includes rice cereal with bananas, avocadoes or sweet potoatoes mixed in. Food was the overarching theme of the last month, as Isaac grew bigger and became hungrier and hungrier. He wanted to eat every three hours at night, which was the same schedule he was on as a newborn! That made Mommy very tired, and Isaac wasn't getting too much sleep either since he was eating all night (although he was still in great moods during the day). Now, since he has started eating baby food and we've done some sleep training with him, he's sleeping for six to seven hours between feedings at night, and Mommy has a spring in her step again!

Posted by Educating My Own at 8:19 PM