Noah had a blast with something seemingly simple at Grammy and Yaya's house: a telephone.

They have a real live telephone on a table in their den.  You can pick up the handset (which is conveniently connected to a cord), hear a dial tone and dial a phone number.  Then the most amazing thing happens:  someone answers and you can talk to them!

This was so unusual for Noah because we don't have a house phone, or a phone on a cord.  We guard our cell phones because they get dropped or music is mysteriously purchased on the internet when we're not looking, or emails are sent to work contacts.  Usually when the boys want to use our cell phones to play games or look at family pictures, we put the phone in "airplane mode" so they can't make calls or buy products. 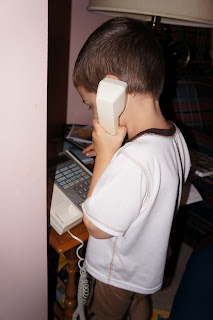 But, at Grammy and Yaya's house, it was so fun to use the phone.  Noah used the programmed button to call Yaya's office and leave many, many messages for him on his answering machine.  Grammy wrote out her cell phone number, and then her cell phone rang many times too.  Sometimes she would answer and sometimes Noah wanted it to go to voicemail so he could leave a message.

I was out running errands, and I got a call from Noah, which was so cool.  He called just to say "Hi" and "I love you."  When I got home I realized that no one else knew he had made the call, so it was something he did completely on his own.

A telephone.  Who knew it could be so fun and such a new experience?