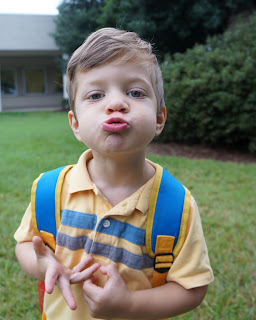 Isaac calls his preschool "Babygarden" since Noah is going to Kindergarten!

Isaac was so excited to finally go to school after taking Noah to school for two years.  He had a great day, and according to his report, he played with play-doh, trucks, cars, and the pretend microwave, had a snack of Cheese-Its, and did not go outside to play.  He was really hoping to try out the new preschool playground, so that was pretty disappointing to him.  Maybe they'll play outside the next day!

Isaac is going to preschool on Tuesday and Thursday mornings.

Posted by Educating My Own at 9:17 PM