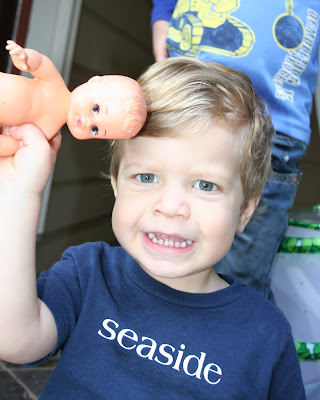 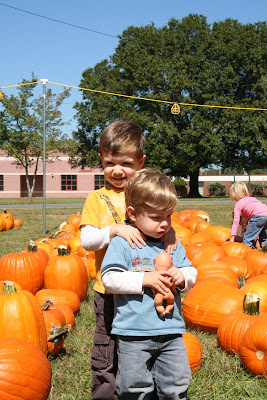 Isaac loves Baby very much, and he took baby everywhere he went in September and October.  Baby helped Isaac get into the routine of taking Noah to preschool and then picking him up after lunch three times a week.  If Baby came along for the ride, Isaac was happy about the adventure.  Since then, Baby stays at the house while we go out. 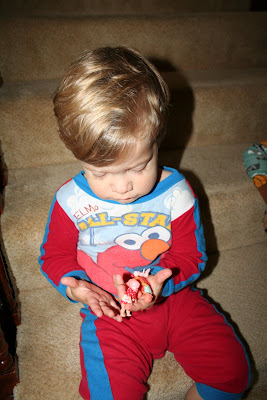 Isaac is fascinated by babies.  He shouts "baby!" at the top of his lungs whenever he sees a baby.  And he also loves "itty bitty" things.  So, when we were visiting Grammy, Isaac found "itty bitty" babies in Grammy's doll house.  He carried around them by the handful and wanted to sleep with them too. 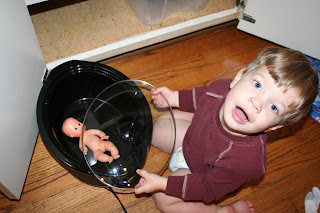 But, Isaac is all boy.  He cuddles with Baby and comforts him when he cries.  But his favorite other things to do are "cooking baby" in the crockpot and "jumping baby," when he throws baby up in the air as high as he can.
Boys and their baby dolls are so funny.  When Noah was three, he loved the "school babies" at his preschool so much.  He would spend a lot of time in the housekeeping area caring for the babies.  His teachers told me he would feed the babies and rock them and wear them in a little sling.  He showed so much affection toward them.  Then the next moment, he would be cooking them in the play oven and hitting their heads on the furniture.  Boys!!!