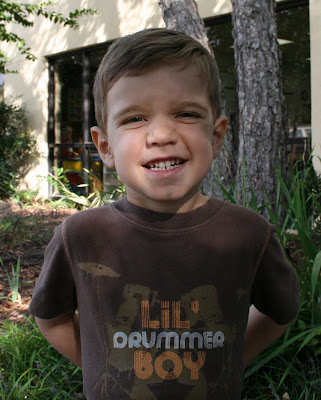 Today was Noah's first day of preschool at Good Shepherd. He's in the Monday/Wednesday/Friday 4's class, and school is in session from 9:30 to 1:00.

Noah has been so excited about school starting. Crazy excited. He chose his first lunchbox and he thinks the best part of school is that he gets to eat lunch there. He was so excited this morning that he would only make cheeseball faces for the camera, but it captures his mood.

His teachers are Ms. Karen and Ms. Jean. We can tell that these are the perfect teachers for him just by their names. Noah learned how to say the /k/ sound in June, so he can say "Karen" perfectly. We have been working on the /j/ sound so that he can say "Jean," but that's been a tough sound for him. We've worked on it together and I've heard him practicing it in the car and when he's laying in bed. He really wanted to be able to say "Jean" before school started. And then, when we were in Hilton Head, he got it! Now he's saying all sorts of words like "jellybean" and "joke," and he's so proud of himself. Nothing like a deadline to accelerate learning! 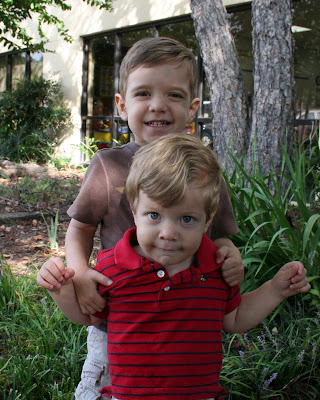 Noah's excitement for school was not shared by Isaac, though. When we walked Noah to his classroom this morning, Isaac went right inside and made himself at home at an activity. I've always thought that Isaac sees himself as being four years old, but this morning confirmed it. We kissed Noah good-bye and headed outside. Isaac wanted to play on the playground, but I wasn't sure of the schedule for when a class would be coming out to play, so I had to get my little guy in the car kicking and screaming. The worst part was when Isaac continually screamed "Whoa-wa! Whoa-wa! Whoa-wa!" (Noah!) as we pulled out of the parking lot. He was not only upset that he didn't get to play at school, but he was horrified that we were leaving without Noah!

Isaac and I ended up having a great morning together, but there's going to be an adjustment period as we figure out how to drop off Noah and get back in the car again.

This story is to be continued on Friday...