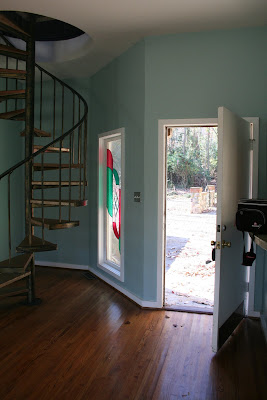 The first change we made at our new house was to get rid of the spiral staircase.  It was on the right immediately inside the front door, and it went up into the master bedroom.  It was made of black iron, but it had a rubbed finish so that gold showed through the rubbed areas.  Noah didn't want to walk on it by himself, but it was a climbing magnet (a very unsafe one) for Isaac.  We were sure that some owner had installed the staircase over the years as a renovation, so we were very surprised to see the spiral staircase in the original blueprints for the house.

We thought we had found a guy who would remove it for free because he wanted to install it in his own house, but that didn't pan out.  Matt tried to unbolt it himself, but that didn't work.  He tried using a sawzall to cut through it, but that didn't work either.  Finally, Matt found someone who would make it disappear for the great rate of $50.  It's been the best $50 we've spent on the house so far! 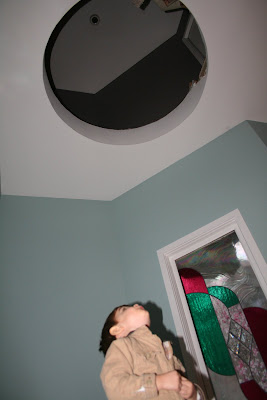 Noah had so much fun looking up at Matt through the hole. 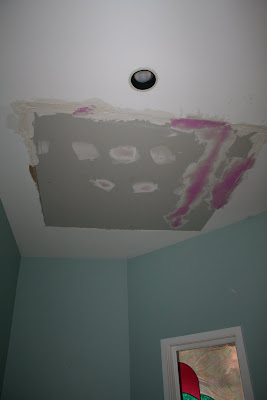 New sheet rock was installed right before we moved in, and the wood floor beneath it was patched and repaired.  Goodbye spiral staircase!