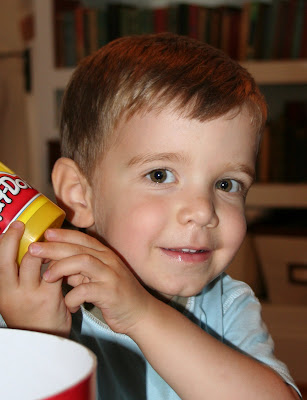 Noah started preschool at The Children's Schoolhouse last week. We've been prepping him for school for a while now, talking about the fun things he'll do there and stopping by the school to play on the wonderful playground. When the first day of school arrived last week, Noah was ready but nervous. He did a great job on his first day (he didn't cry, but I did after I dropped him off!), but he was much more nervous on the second day. He wanted me to hold his hand on the entire drive to school, and he was really hesitant to get out of the car when we got to school. The second day was a turning point because he was so happy and confident when we picked him up that day. He looked forward to going to school on the third day, and that happened a lot earlier than we expected.

Noah has a very practical approach to school. Last week I saw that most of the students created paintings, but Noah must have chosen not to. When I asked him if he made a painting he said, "No. I told them that I have lots of paints at home." I said, "Do you want to do things at school that you can't do at home?" and he replied, "Yes!" Very practical.

The first week of school came and went, and Noah chose to not eat a snack. It wasn't an issue because I was loading him up with a big bowl of oatmeal before I sent him off, so he probably wasn't too hungry. When I asked him about it, I could tell that he was very hesitant about eating a snack at school and he said "I'll eat a snack when I get bigger." On the fourth day of school, Noah's teacher was excited to tell me that Noah chose to eat a snack! She said she had taken all the children into the snack area just like they do every day, and Noah only chose to have a cup of water like he had done in the past. Then, he lingered around and played close by and waited to every other child to finish their snack. Once the area was empty, he served himself and ate happily by himself. His teachers were so pleased and Noah was very proud of himself when I picked him up. Yesterday, he told me that he ate snack for a second time and he sat with a friend who was also wearing a guitar shirt. I think that's a lot of progress for the first two weeks of school!

Noah has been singing a lot of new songs that he's learned at school. Today he's singing "This old man, he played one, he played knick-knack on my drum..." I had completely forgotten about that song! He's having fun at school!

Posted by Educating My Own at 2:29 PM