Grammy and Grandad at the Beach 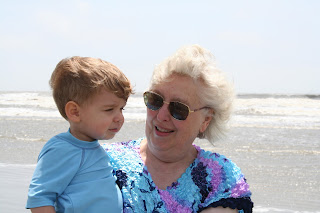 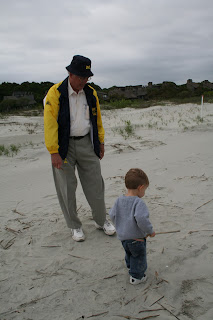 Grammy and Grandad flew from Detroit, MI to Charleston, SC and drove to Kiawah Island to join us on our vacation. We are so happy to have them here! Noah was napping when the arrived at the rental house (well, he was trying to nap, he never actually fell asleep). When he came out of his room and saw that Grammy and YaYa (he calls Grandad YaYa) were here, he started laughing so hard that he fell down on the ground. I think that was the most enthusiastic greeting that he's ever given anyone!

We went to the ocean right after a big storm had passed, and there were all sorts of interesting things that had washed up on the beach. Grammy has quite a knack for finding seashells, and she started a big collection that she added to over the next couple of days. Noah had the most fun playing with sticks and drawing in the sand. He figured out how to draw big O's around himself by putting the stick in the sand and turning around.

We drove to The Sanctuary and enjoyed the beautiful hotel and scenery. Noah loved the large staircase - he sat on the stairs, then laid down and didn't want to leave. I guess he has good taste!

Here's some pictures from the beginning of Grammy and Grandad's trip to the beach.

Posted by Educating My Own at 3:21 PM