In reality, Isaac has been three for quite some time, so now his body and his mind and his age all match!  Although, he doesn't see it that way.  As his birthday has been approaching, Isaac has been holding on to being two and being a baby.  He sometimes asks me to call him "Baby" instead of "Isaac," and he likes to be held like a baby and rocked.  It's all ok with me!  I'll take as much "Baby Isaac" as I can get!


Grammy and Yaya joined us for Isaac's birthday celebration! 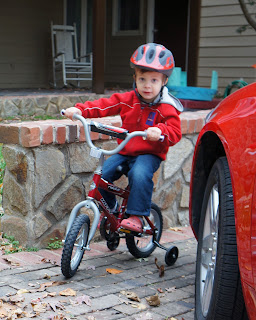 Isaac's big birthday gift was his very own bike!  He loves it and has already spent hours zipping around our driveway at a very high rate of speed.  It's even more entertaining when he screams with delight as he's pedaling past.

We love you so much, Baby Isaac!  You'll always be our baby, but you're going to love being a three-year-old too!

Posted by Educating My Own at 7:59 PM