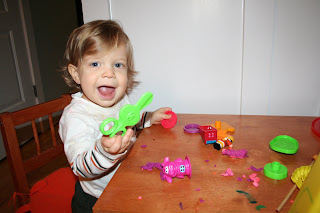 Isaac has discovered Play Doh!  It's one of the benefits of being the second child.  I don't think we bought Play Doh for Noah until he was almost two years old because that's the suggested age on the package.  Isaac discovered the fun of Play Doh when he was about 14 months old, and it's one of his favorite things to play with now.  He finds a color of Play Doh that he wants to play with and brings it to me while saying "oh-pa!  oh-pa!"  When I open it for him, he loves to mush it in his fingers.

Posted by Educating My Own at 9:34 PM