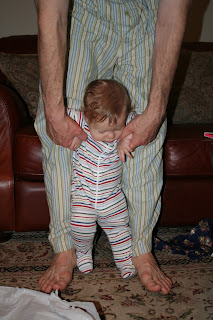 We are having fun really getting to see Isaac's personality. He has become so much more social in the last month. When we're at home, he loves to "talk" to us and he makes the cutest baby noises and he becomes really excited and animated. When we're out, he has big smiles for everyone he sees (especially the ladies), and he throws in an occasional "ah-goo" just to get people talking about how cute he is.

Isaac thinks that anything Noah does is absolutely hilarious. If Noah jumps up and down, Isaac laughs. If Noah makes a funny face, Isaac laughs even harder. He looks around until he finds Noah and watches everything he does. Thankfully, Isaac still has a high tolerance for noise and he still doesn't mind when Noah plays his drums "very very very loud," as Noah says.

Isaac has also become all hands this month. He loves to hold his hands up and study his fingers, and he loves to chew on his fingers and fists. But more fun than that is his new ability to pull Mommy's hair! He has an amazing talent to grab a hand full of my hair and wrap it around his hand in such a way that it's really painful to remove!
Posted by Educating My Own at 9:10 PM