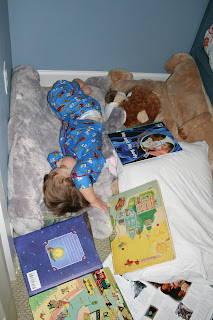 Noah still takes an afternoon nap on most days. Once in a while, however, he decides that he isn't going to take a nap. He usually cries for a while because he wants to come out of his room (we put up a gate during nap time), but then after a while he usually settles down and "reads" books to himself. The other day when he wasn't napping, he kept saying, "I'm up, Mommy!" over and over again. When I went upstairs to check on him, this is what I found - he was sound asleep in his book nook. When he woke up later and realized where he was, he laughed and laughed!
Posted by Educating My Own at 6:52 AM