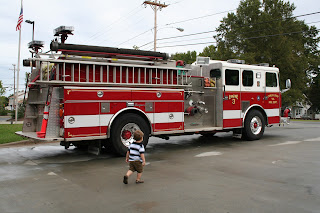 Fire trucks are one of Noah's absolute favorite things, so we were so excited to take him to the open house at the new Cornelius fire station. He's been to our neighborhood fire station before, and he saw fire trucks close-up on July 4th, but today was different. Something about the firetrucks was quite scary to him. I've read that two-year-olds can suddenly become afraid of familiar things, so maybe that was what happened. And, the trucks are really huge and can be pretty overwhelming. Noah did like being at the fire station, but we were there for quite a while before he wanted to go near the trucks. You can see from the pictures that he looks quite tortured in some of them! Then, after we had been there for a while, he became quite brave and started walking around by himself and exploring.
Posted by Educating My Own at 3:10 PM